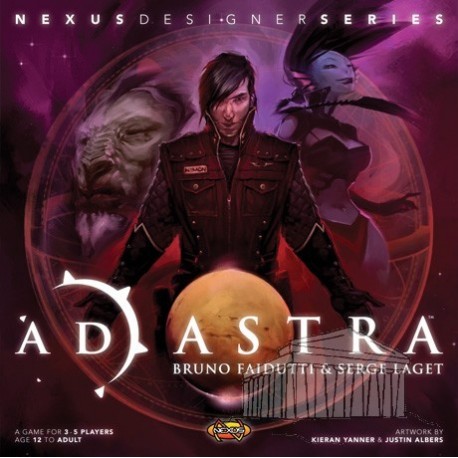 Ad Astra ("To the Stars"), you lead one of the five factions of future humanity in its exploration of the galaxy.

Ad Astra ("To the Stars"), you lead one of the five factions of future humanity in its exploration of the galaxy.

Domina powerful technologies, Terraform newly discovered planets to give men a new home, and explore the mysterious relics of a lost alien civilization ...

Who able to create the largest interstellar civilization?

Ad Astra is a game designed by Bruno Faidutti and Serge Laget, the co-creators of great games like The Mystery of the Abbey, Castle and Kheops.

In the far future, Homo Sapiens has been gradually adapting to life beyond our planet. For centuries colonized the solar system and eventually humans have changed, evolved to form five different breeds adapted to life in different planetary environments.

But the power of our star, the Sun, is declining unexpectedly, and it is time for humanity to take the one final leap toward distant stars ...

Ad Astra (always written in the manual with the · between the two words) is a resource management game poorly understood.

Very great surprise this almost unknown game that puts us in command of a race of humans to conquer the galaxy. We really like the games of resource management, and this is its greatest exponent. No military option, only expertise in the collection, use and sharing of materials and minerals which gives us this game will boost us to victory.

It plays well with 4 and 5 players, and a little looser with 3. It misses a mode for 2 players and perhaps the addition of a sixth. Within half an hour we should have clinched the game.