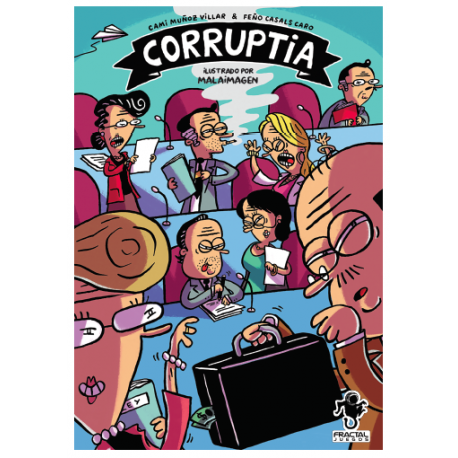 Deceive, bribe, buy votes, blackmail and colúdete. Everything is permitted. Any resemblance to reality is pure coincidence.

The laws in Corruptia are decided between four walls, and the senators are the ones that will listen to the voice of the people. The problem is that the true objective of the senators is not the common good, but the surplus value of their private businesses. Each senator watches over his personal agenda, increasing its value through projects that favor it. The senators will propose bills that will be put to a vote, being able to buy votes through blackmail, bribes, lies and tricks. Any resemblance to reality is pure coincidence.

The main objective is to modify the value of the Departments and gather the most valuable Projects in the Secret Agenda. Each turn, the Senators will propose Project cards from their Secret Agenda and relocate the Public Officials of the board. These proposals are put to a vote, so it will be necessary to buy the votes of the opponents. With each new Project, the number of Officers per Department will change, increasing or decreasing their value. At the end of the game, a Table of Values will be formed according to the number of Officials in each Department. With this Table, common to all the Senators, it is calculated how much the Projects of the respective Secret Agendas are worth. The Senator with the most points in his Secret Agenda will be the winner.