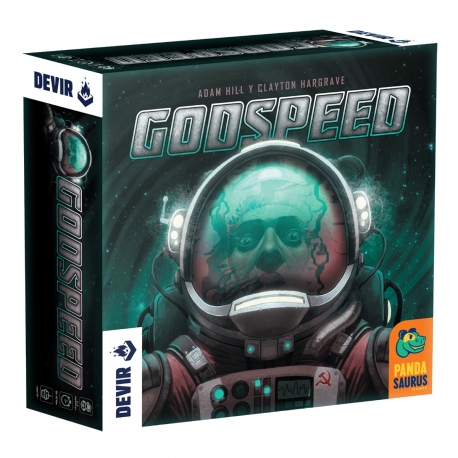 At the end of the 10 Rounds, the one with the most points wins!

Godspeed is a 2020 strategy game of the year in a sci-fi universe, a middleweight euro designed by the creator couple of Clayton Hargrave and Adam Hill. The game art is the work of artist Jesse Riggle, Unearth illustrator. It is a game for between 3-5 players with a playing time between 45-90 minutes.

Godspeed is a middleweight eurogame, in which it is said that the subject of the landing on the Moon was only an excuse to cover up a much more ambitious space mission. On this trip, a group of astronauts reached the exoplanet Ursae Majoris after 18 months of interstellar travel: without any intention of returning to earth. We interpret scientists from 5 different nations: USA, Japan, The Soviet Union, The European Nations and India.

Players will compete for 10 rounds, trying to cope with different events, both on the Exoplanet and on Earth. The mechanics of Godspeed are based on the placement of workers and resource management, trying to upload the different tracks that will serve us to score: Defense, Exploration, Trade and Infrastructure. We will also have various additional objectives such as the construction of ancient extraterrestrial relics.

Godspeed is played in 10 rounds, each with four distinct phases.

The first Phase is called the High Council, this is a negotiation in which the nations will meet to decide how to respond to a common event that occurs on Earth or on the Exoplanet.
The second is the Supply Depot Phase, an auction phase in which nations bid on the supply depot cards or the first player marker. Players choose the cards in the order of their bids. The player who makes the highest bid can receive a second delivery.
The third is the Action Phase - this is a worker placement phase, the core of the game. Nations place team members in action spaces to perform various actions and gain prestige. However, workers can only be used once per round, the challenge comes from knowing where to best use their specific skills, or instead assigning them to general tasks.
Finally there is the Resolution Phase: in this phase, nations produce new resources and return their team members home


At the end of the 10 Rounds, the one with the most points wins!