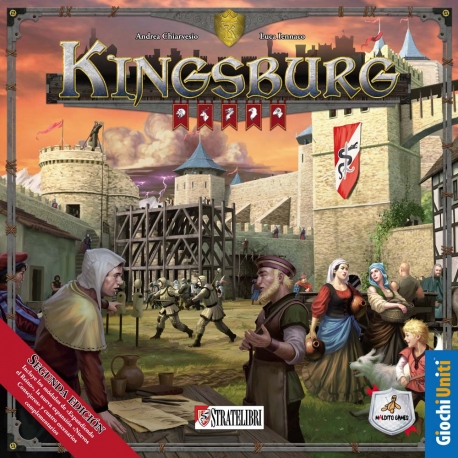 The kingdom of Kingsburg is under attack! The invading monsters are gathering at the border with the goal of invading and looting the kingdom!

The kingdom of Kingsburg is under attack! The invading monsters are gathering at the border with the goal of invading and looting the kingdom! Your King has left you in charge of a border province; you will lead your province and help defend the kingdom. To accomplish this, you must influence the King's advisers and the Royal Family to get money, wood, stone and soldiers to expand and defend your lands. But you are not the only governor seeking the help of the councilors! The other players will also seek to obtain the best resources for their own territories.

King Tritus is waiting for you. Will you be able to become the most influential and powerful ruler of the kingdom?

Kingsburg is played in 5 years, a total of 20 turns. In each year, there are 3 production stations to obtain resources, build structures, and train troops. Season 4 is winter, in which all players must fight the invading army. Each player must face the invaders, so it is not a cooperative game.

Resources to build structures and train troops are obtained by influencing advisers to the King's council. Players place their influence dice on council members, and each advisor grants different resources, deploys soldiers, victory points, and other perks to the player who was able to influence the advisor this round. The player with the least influence dice sum is the first to choose where to spend it, this balances bad dice rolls. Even with a low roll, a smart player can leave the council with a good number of resources and soldiers.

At the end of the 5 years, the player who best developed his territory and most pleased the King through the council will be the winner.