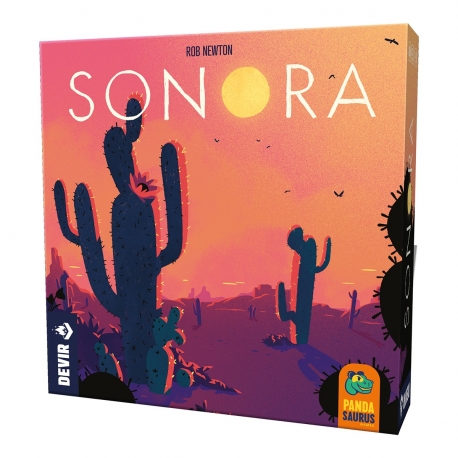 Welcome to the spectacular Sonoran Desert!

It is a game that inaugurates a new genre, mixing the mechanics of flicking and roll and write, we present the first flick and write game in the world. In it, 1 to 4 players will compete in the Sonoran desert for victory in different mini-games in games of about 45 minutes.

You and your companions have entered the Sonoran desert, a place of great beauty. Sunsets flood the horizon in beautiful colors, revealing deep canyons, tributaries, and ancient cliff dwellings.

Immerse yourself in the secrets of the desert and rise to victory ... or compete against yourself in a spectacular solo mode. Players will try to get one of their wooden discs to slip through one of the holes on the board, in which different landscapes are represented with spectacular colors at the sunset of the Sonoran desert.

Each of these areas covers a different type of mini-game, so to achieve victory you will need a lot of aim and special care with the rivals' discs, who will be eager to move from region to region.

A Sonora session is divided into two separate phases: players first try to insert their tokens into one of the dotted areas before filling in their sheets. Each of the game zones allows scoring differently, depending on the number of discs the player has in the area: here the classic roll and write mechanisms come into play, since it will depend a lot on where the discs and sections are. score sheet that they have previously filled out. In addition, in the flicking phase, great care must be taken not to throw the discs out of the limits of the zones, since they cannot be used to score. Also, the rest of your opponents are willing to hit your wooden discs out of the areas and gain the upper hand. After finishing the writing phase on the last turn, players add up the scores for each area along with any bonuses you may have earned over the course of the game.

Welcome to the spectacular Sonoran Desert!