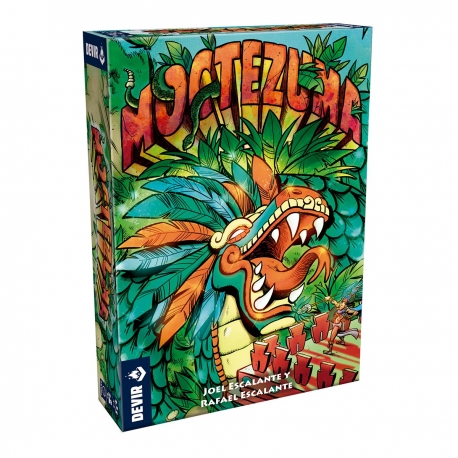 In the Moctezuma game you will have to put yourself in the shoes of the inhabitants of the city of Tenochtitlan, organizing the defense against the siege of the Spanish conquerors.

In the Moctezuma game you will have to put yourself in the shoes of the inhabitants of the city of Tenochtitlan, organizing the defense against the siege of the Spanish conquerors.

Claim the help of the gods, with Quetzalcoatl at the forefront of all of them, and protect the Mexica people from invasion. The Spanish ships were sighted looming on the horizon.

The Mexica people could not know what they were about to face, as an invading army that was technologically much more advanced and driven by the faith of their foreign religion was upon them. However, they know the terrain like no one else, and they have the support of their ancestral gods, severe but willing to support their people.

Moctezuma is a game designed by brothers Rafael and Joel Escalante, a duo of Mexican game designers. They have sent us this interesting proposal from the land in which the action of the game takes place, and it is so largely because these authors already have enough titles with a Mexican theme behind them. We have also been able to count on the invaluable help of our colleague Lorena Mancilla, from the Devir Mexico office, who has done a thorough cultural supervision task to ensure that the game fits in the best possible way with the historical period it reflects. In the graphic section we have been able to count on the art of Àlex Gallego, one of the most in-form cartoonists of the moment, who has provided his freshest vision, endowing the characters of the game with great dynamism and sympathy, staying true to the time frame that It represents.

In this game you will have to collaborate to maintain the defense of the city of Tenochtitlan from the foreign invasion. The Spanish troops will use everything in their power to bring down the different temples of the city, in order to demoralize and conquer its inhabitants.

For your part, on the one hand you will have to manage your troops of warriors and put them at the service of the great commander Moctezuma, and on the other, you will have to know how to optimize the use of priests.

With their sacrifices and invocations they will be able to reinforce the effect that the Mexica gods will have on the game table. The gods play a fundamental role in Moctezuma.

We will have ten different gods, each with a unique power that will ensure that the game has great variability between games. The most important will always be Quetzatcoatl, since we can only win the game if we can invoke the four aspects of his power before the city is conquered by the Spanish.