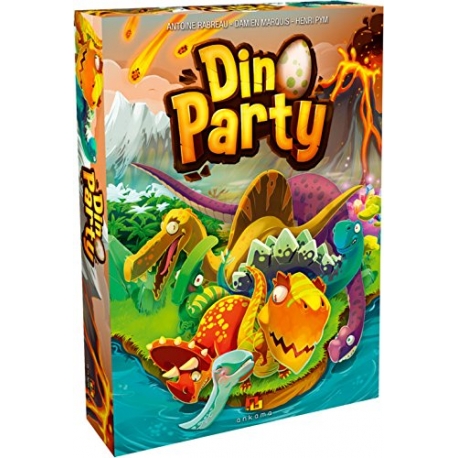 The end of their world is approaching! The Earth is as flat as a pancake, and made up of a single continent, and the little known Plodocuses are trying to save their species somehow. Unfortunately, the eras are superseding one another, and natural catastrophes are wreaking havoc, actively contributing to their disappearance. Your Plodocuses are going to try and reach some protected areas. They’re doing their best to gather together, in order to enlarge their herd. Will you manage to avoid the pitfalls of this unforgiving world and save some of them from extinction?
In this game of skill designed for kids, 2 to 6 players engage in a fun-filled battle to change the course of prehistory! Each player has 5 dinosaurs of different species to throw onto a board representing the Earth (divided into different areas) during 4 successive Eras (rounds). The aim is to throw several dinosaurs of the same species onto the same area earning additional dinosaurs to throw next time and save your species. But be careful! The Earth is surrounded by oceans and they are swallowing up more and more land on each round, so that fewer “safe areas” remain… Dinosaurs that have fallen into the ocean are lost! But that’s not the only problem: every round one more safe area is removed, replaced by a natural catastrophe tile, which reduces the space for surviving dinosaurs even further. The tension builds throughout the game, as the number of dinosaurs starts to dwindle. As if that weren’t enough, before each new era, the player with the fewest dinosaurs must pick up two cards that introduce new throwing rules (on one leg, with one eye closed, using your other hand, etc.)! They give one to the player of their choice and the other has to be done by all the players. The throwing rules pile up until the end of the game. But don’t panic! All of the players take two extra dinosaurs every round so nobody gets left out of the game. After four rounds, the player with the most dinosaurs left has saved their species and won the game!