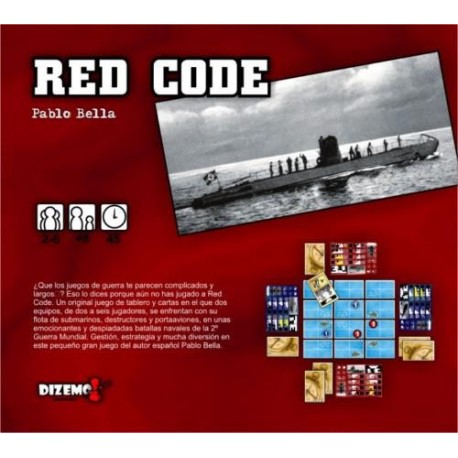 Dive into World War II and fight for control of the oceans recreating great naval battles. Take control of a military ship of the age: submarine, destroyer or aircraft carrier, all ships are different from each other, manage thecrew of your ships to be the most effective captain and so beat the enemy ships. Red Code is a board game created by Paul Bella, for 2-6 players, ages 8 and cards game, around 45 minutes. Players are divided into two sides, so the game is cooperative for more than 2 players. Each ship has its own qualities and advantages, eg the submarine is fast and with good weapons but nevertheless are weak and easy to penetrate his Scudery. However, a destructor is strong and heaviest but is very slow turn over short distances but is lethal. The board of the game is made up of cards of map and generate a new random map each game, introducing new running water and islets, each player also has a control board which will manage your ship maneuvers using the crew. We will also have the counter repairs and breakdowns reflecting the strength of our ship to be sunk. Red Code is a very strategic game, with small touches of chess, because the position of the ships on the board strongly influences since it is not the same face a pawn to a tower or in our case an aircraft carrier than a submarine.
Manufacturer: DIZEMO
Nº of players: 2-6
Duration: 45
Minimun age: 8
Language: Spanish
Notes: Made in Spain