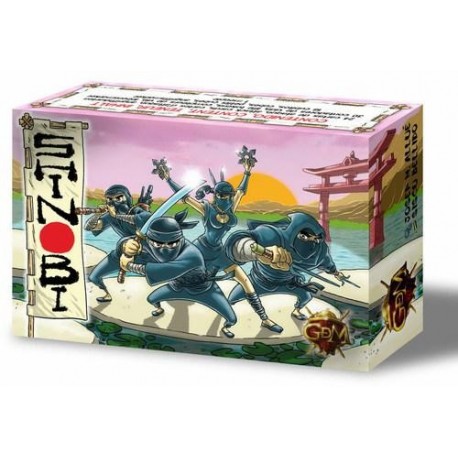 The Great Daimyo of the Ninja Clans has died in mysterious circumstances, just as it happened with his predecessor, and his predecessor’s predecessor, and so on so forth back to immemorial times. In order to take his place and serve the Shogun, the Daimyos of each clan have started the choosing process, and yes, you are said Daimyos. If you want to become the next Great Daimyo, you only need to manage one thing: Be the last survivor.

During your turn in Shinobi Assasins, you must attack the three rivals on your right, giving each of them an attack card face down. As you do so, you must tell each of them which weapon you're attacking them with — but of course this DOESN’T have to be TRUE. Remember, we’re Ninjas. Upon receiving the face-down attack, the assaulted player must mark the kind of attack he’s been told to be receiving by placing a black cube on top of the appropriate weapon icon on the back of the card. If a player has already received two identical attacks from other ninjas, be they true or not, you cannot repeat the same attack a third time.

When you attack, you can say whatever you want and gesticulate frantically or subtly wink to another player, anything you deem necessary to confuse them as to which attack you’re really assigning. Remember, deceit will be your most powerful weapon. Once you’ve assigned three of your ninjas to attack your rivals, the following player will do the same.

Once all the players have assigned their attacks, each of you will have before you three face-down attack cards, courtesy of the loving clans to your left. Each card will have a cube marking the weapon the attacking ninja is supposedly using. The time has come to use intuition, dodge and denounce.
Manufacturer: GUERRA DE MITOS
Manufactured: Made in Spain
Nº of players: 4-6
Duration: 15min
Minimun age: 10
Language: English, Spanish