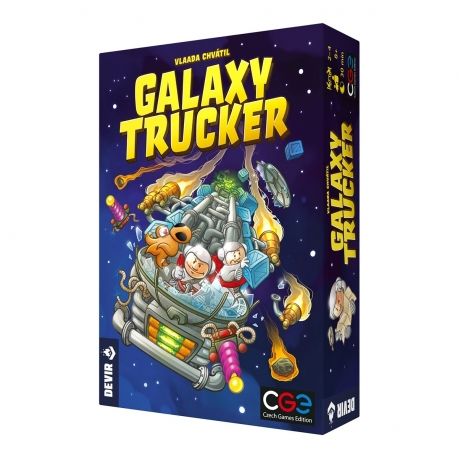 Galaxy Trucker is a 2008 game designed by the famous board game author Vlaada Chvátil, creator of great masterpieces like Through the Ages or Mage Knight. The illustrations are done by Radim Pech, who is responsible for the art of other great games, such as Space Alert.

Galaxy Trucker is a 2008 game designed by the famous board game author Vlaada Chvátil, creator of great masterpieces like Through the Ages or Mage Knight. The illustrations are done by Radim Pech, who is responsible for the art of other great games, such as Space Alert.

Now, years later, Devir exclusively brings the relaunch of a board game classic. This combo of big stars created a great game from head to toe: Galaxy Trucker. It offers very dynamic games between 2 to 4 players, with lots of interaction and great fun lasting about 60 minutes.

It is a game of tile placement, in which all the players will search, simultaneously, among a pile of pieces scattered on the table. In a galaxy far, far away... they also need sewers, and the company "Mobile Constructions" takes care of building them. Everyone knows their pilots, brave men and women unafraid of danger, who if paid right, will fly through hell. Now you can be one of them.

You will have access to prefabricated spaceship parts made from sewer pipes. Can you build a ship resistant to meteorite impacts? With enough weapons to defend yourself against pirates? Big enough to carry a lot of crew and cargo? And will it be so fast to be the first?

Put yourself in the shoes of a galactic trucker and launch yourself into the universe. Trucker's Galaxy phase where all players must build the ship at the same time is the heart of the game. There are a series of rules for assembling ships, which if you don't follow strictly can deduct points. Or even blow up your ship!

In the assembly phase of Galaxy Trucker, you can only pick up pieces with one hand. The tiles are scattered in the center of the table, within everyone's reach. The tile can only be revealed once you assemble it on your ship, put it in your supply, or return it, discarded, to the center of the table. We can only take one piece at a time, and the pieces that we assemble in our ship cannot move from place.

All of these elements make building in Galaxy Trucker absolutely crazy!

In the flight phase, it is tested if the ship we have built is as resistant as it seems. Cards with events are revealed in the deck, and players will face enemies of all kinds, find meteorites or abandoned ships, or reach the long-awaited planets, where they can land and collect goods.