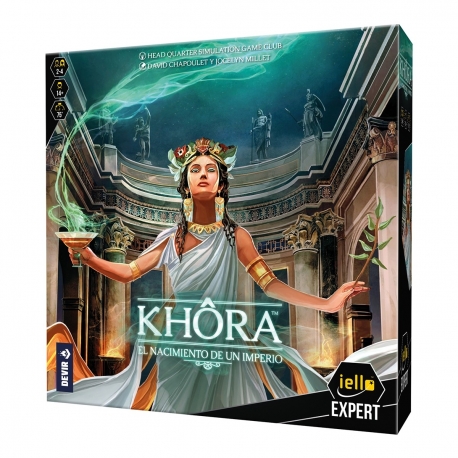 Will you be able to dazzle the humanity of the ancient world with the light of your civilization?

Khora is a game designed by Head Quarter Simulation Game Club and illustrated by David Chapoulet and Jocelin Millet. Designed for a minimum of 2 and a maximum of 4 players over 14 years of age, the games last an average of 75 minutes. In this strategy title, players will have to expand their city and manage the economy to get the highest number of victory points.

In Khora, players become the leaders of a city-state in classical Greece. They will take control of Athens, Sparta, Thebes, Argos, Olympia, Miletus or Corinth with the aim of developing their full potential and dazzling humanity in the ancient world. Throughout nine rounds, the contenders must decide what they invest their shares in (of the 7 available) and thus determine the progress of their civilization. Will they develop new philosophical currents? Will they explore the ends of the world with their hoplites? Will they promote trade?

Players must wisely manage their citizens, which will allow them to carry out actions; taxes, to collect drachmas; the glory, obtained by completing achievements, and the troops, essential for military actions and exploration. The strategy will be essential to win, but a slight component of chance will also have to be considered. Each player will roll their dice (two, initially, although this number can increase throughout the game) to determine what actions they can carry out and the order.

Each of the seven actions available in Khora is assigned a value, from 0 for philosophy to 6 for development. The higher the result obtained with the roll of the dice, the more options the player will have at his disposal, since he will be able to choose the one of the same value or less. In case of wanting to carry out an action that costs more points than those obtained by the dice, the player can use his citizens to compensate the difference.

In addition to the development of the turns, there are global events, which will affect all players equally, and a series of achievements to compete for. Likewise, each city-state has different basic characteristics. Subtle differences that, multiplied, end up forming a wide mix of variables that guarantees that no two games will be the same.

Beyond the multiple gameplay and its historical setting, inspired by classical Greece and the ancient world with very immersive illustrations and components, Khora is quite a challenge for the most experienced players. Evaluating the different variables and looking for the best strategy that fits the results of the dice rolls will be a challenge for the most restless minds.

Khora, which is the Greek term to identify the territory occupied by a polis along with its entire area of ​​influence, brings to the table the Greek air of an epic poem. An Odyssey for lovers of resource management that promises to be quite a challenge. Will you be able to dazzle the humanity of the ancient world with the light of your civilization?