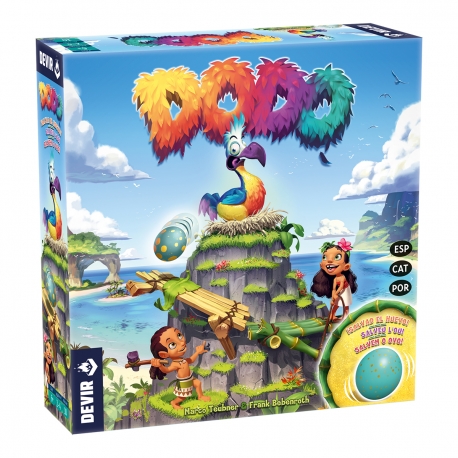 Will you manage to save the little dodo baby?

Dodo is a fun cooperative game that can be played by 2 to 4 players, ages 6 and up, in games that don't exceed 10 minutes. It is designed by Marco Teubner, author of children's games that have received numerous awards, such as Stone Age Junior or Carcassonne Junior. Using their memory and without wasting a second, players must build bridges and a pier to rescue the Dodo's egg, which is slowly falling down the slopes of the mountain.

One more year, the colorful dodo bird has prepared its nest on the highest peak of the island. However, this bird is easily distracted and can inadvertently push the egg at any time. Luckily, the Hagulaminapitopasi tribe, for whom the dodo is a sacred animal, is already prepared and will do everything possible to prevent the egg from falling down one of the mountain cliffs.

Dodo has a spectacular staging. Before starting the game, you must assemble the three parts of the mountain and distribute the 58 construction tiles, face down, around it. You will place the big egg on top of the mountain and the dodo on top. When you're ready, move the dodo aside and the egg, little by little, will move up the slopes of the mountain. Hurry, build bridges!

The youngest player starts by rolling the die, which shows a different construction material on each side. Next, the same player takes one of the tiles and turns it over; if the symbol matches, he uses it to build one of the bridge parts. If not, pass the die to the next player in clockwise order and turn the tile face down again. Having a good memory will be vital if you want to save the dodo egg! Once all the spaces that the bridge asks for are filled in, hook it to the side of the mountain.

Throughout the turns, players will use wooden planks, nails, bamboo poles, hammers, leaves, rope, or the help of villagers from the tribe, who serve as wild cards, to complete the bridges and the jetty. Dodo games are frenetic, the egg never sits still and won't leave you much time to think!

Dodo allows you to adjust the level of difficulty using two mechanisms: On the one hand, you can remove wild tokens to make it a little more difficult for you to build the bridges. On the other hand, you can use or not use the slots with a skull symbol. Whether the challenge is more or less difficult depends on you!

The little ones at home will have a great time playing Dodo. It is a very immersive proposal, with very striking components: The egg, which descends slowly but steadily down the slopes of the mountain, seems to move by magic! All this while you exercise your memory and collaborate with the rest of the players to achieve a common goal. Will you manage to save the little dodo baby?