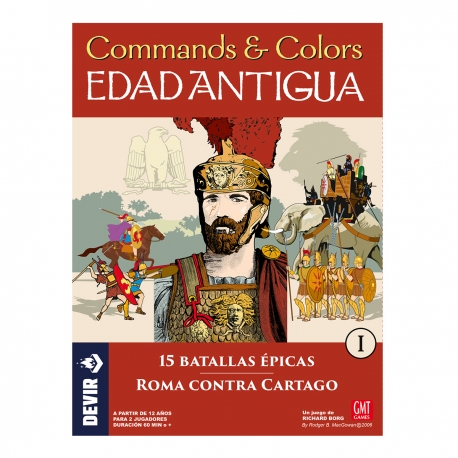 Commands and Colors Ancients is a war game for two players, ages 12 and up, designed by Richard Borg in which players re-enact epic battles from ancient times

Commands and Colors Ancients is a war game for two players, ages 12 and up, designed by Richard Borg in which players re-enact epic battles from ancient times. Unlike most wargames, the Commands and Colors system is characterized by a light rulebook, which allows most scenarios to be played over an hour.

Relive history or change it forever, leading the Roman or Carthaginian armies. In Commands and Colors Ancients, strategy is vital to victory. Through a card engine system that guides events, the battles evolve in unexpected ways. Each player has blocks of different sizes representing different types of units (such as light, medium and heavy infantry, legions or even war elephants). Each player will move his troops on a map structured in hexagons where terrain tiles representing parts of the battlefield will be placed.

To start playing, choose one of the 15 battle scenarios included in the game; in case this is your first game, it is recommended to start with the siege of Agrigento, a battle that took place in 401 BC in Sicily and that will help you to familiarize yourself with the mechanics of the game. Arrange the board, terrain tiles, and units according to the opening conditions of the scenario. Shuffle the cards and distribute between the two players the ones indicated in the initial spread. You are ready to make history!

The object of the game is to be the first to capture a certain number of victory flags (usually between 5 and 8, depending on the scenario). These flags are earned for each leader or unit completely eliminated and in some cases for capturing certain objectives or terrain tiles. The game ends when one of the players wins the required number of victory banners.

Game turns are dynamic, thanks to the card engine that guides the action. To start, play one of the cards from your hand and resolve its effect; then give orders to your units, move troops and resolve combats. At the end of the turn, draw a new card.

A fundamental part of the game is precisely the combat between the units of the two players. This is resolved by rolling the dice and comparing the results. But, even if there is this component of chance, the strategy will be decisive in determining the success or failure of the attack. For example: some units are better than others against depending on which opponents, fighting on all terrains is not the same, you can shoot from a distance...

Each of the 15 scenarios offer a lot of replayability, as the game experience is very different depending on whether you lead the Romans or the Carthaginians. A title that cannot be missing from the shelves of lovers of history in general and ancient history in particular. Designed for players looking for a good challenge, Command and Colors Ancients is a very good gateway to wargames. Unleash the strategist in you!