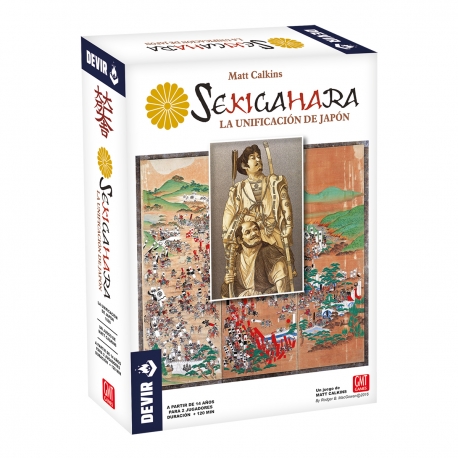 Wisely manage the forces of your allies and rise as the supreme lord of the land of the rising sun!

By buying this product you can collect up to 5 loyalty points. Your cart will total 5 points that can be converted into a voucher of 0,50 €.

Sekigahara is a wargame designed by Matt Calkins and illustrated by Rodger B. MacGowan and Mark Mahaffey. Designed for two players, from 14 years old, the games last about three hours. Winner of the Golden Geek award for the best wargame of 2012, Sekigahara is a game set in the great battle between the armies of Ishida and Tokugawa in the year 1600, the result of which led to the definitive unification of Japan and the Edo period, of more than 250 years of peace.

After decades of war and clan fighting, one lord rises above the rest to claim rule over all of Japan: Tokugawa Ieyasu. The most decisive confrontation to complete the conquest of him will take place in the Sekigahara plain, halfway between Edo (Tokyo) and Kyoto. In this wargame, players recreate the battle, which lasted 7 weeks, over 7 turns. But to conquer Japan, players will require much more than an army; They will need above all that their allies are faithful to them in combat. To do this, they must cultivate the loyalty of their generals and weaken the will of their enemies.

To start playing, choose who will control Tokugawa's troops (the black blocks) and who will control Ishida's (gold blocks). The stickers on the blocks show different symbols, such as the mon of the clan they belong to, the type of unit or if it is a leader with a banner of variable value. To win, a player must score more victory points than their opponent or eliminate the enemy leader. In case of a tie, Ishida is proclaimed the winner!

Unlike other wargames, combat in Sekigahara is not resolved by rolling the dice, but rather through the use of cards, which are used to deploy blocks and assess the loyalty of the troops. If a player is unable to prove that he has the full trust of his generals, blocks can switch sides in the middle of battle!

Throughout the campaign open field battles, castle sieges, retreats or overruns can occur that can tip the balance of victory to one side or the other. Use the special attacks of cavalry and marksman units to get more hits and wisely manage the abilities of your most powerful allied generals.

Ideal for advanced gamers, strategy lovers and fans of Japanese history, Sekigahara invites participants to recreate or rewrite the combat that forged modern Japan. Wisely manage the forces of your allies and rise as the supreme lord of the land of the rising sun!