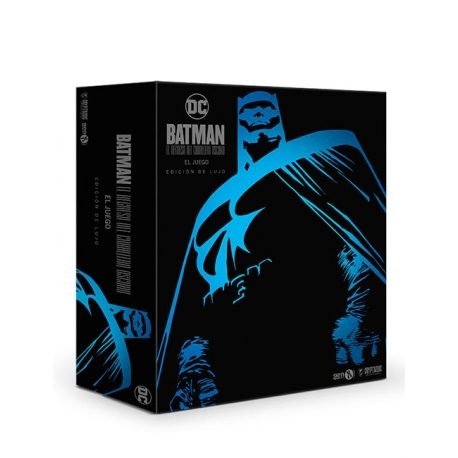 With Batman: The Dark Knight Returns The Game you can wear the Batman suit and act as the Caped Crusader in Gotham City. Use your allies. Defeat your enemies. The night is yours again.

By buying this product you can collect up to 10 loyalty points. Your cart will total 10 points that can be converted into a voucher of 1,00 €.

In Batman: The Dark Knight Returns The Board Game Deluxe Edition, you play as "The World's Greatest Detective" who, having retired, is forced back into action within a gritty Gotham.

He uses everything in his power to face a relentless tide of mutants, police and journalists whose goal is to kill you.

The game takes place in an epic solo game divided into four missions called "Books", each representing one of the four volumes that make up Frank Miller's acclaimed comic book series, Batman: The Dark Knight Returns.

The perks you acquire in each book carry over to the next (along with hordes of enemies).

Instead of traditional leveling, this is a game of attrition. An aging Batman must survive one last challenge, facing villains old and new like Two Face, The Joker and the Mutant Leader; and even his most powerful ally, the Man of Steel.

Your first task is to survive through the Book: The Dark Knight Returns. You will have to investigate, fight and achieve all the objectives that are proposed to you, while keeping Gotham under control, the feds out of your city and your own skin safe.

Once you reach the end of the Book, a new adventure in the Book will begin: The Dark Knight's Triumph and you will continue like this until you complete all four Books or die trying.

Will you let the villains win? Or will you wear gray and blue to claim the night again?
What does this game add to the basic version?