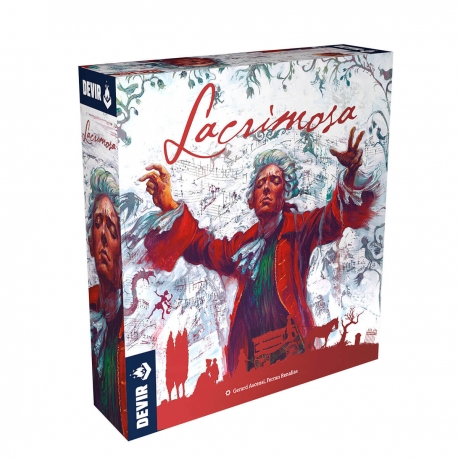 By buying this product you can collect up to 5 loyalty points. Your cart will total 5 points that can be converted into a voucher of 0,5 €.

Lacrimosa is a game that transports us to the European courts of the 18th century following the work of the composer Wolfgang Amadeus Mozart. Designed by Gerard Ascensi and Ferran Renalias and illustrated by Jared Blando, Enrique Corominas and David Esbrí, Lacrimosa offers games that last around 90 minutes for a maximum of 4 players. As a patron of the Austrian genius, you want to be remembered as his greatest benefactor and go down in history with him. To do this, you must finish financing the Requiem that he left unfinished before his death and demonstrate that throughout his life you were his most faithful supporters.

With deck-building and hand management mechanics, Lacrimosa is played over 5 rounds, spanning Mozart's various creative moments, in which you'll compete to score the most Renown Points. On your turn, you will commission works from the composer, which you can perform or sell; you will remember shared memories and trips to the most famous stages of the continent... And, of course, you will help his widow Constanze to finish the Requiem, which will be remembered as his posthumous work.

Lacrimosa has a spectacular table setting, with a central panel full of details where a map of the center of Europe is represented, through which you will accompany Mozart on his travels. The fragments of the Requiem are also represented, which will gradually be completed with your actions, and spaces for the work and memory cards. The cards, which are also played on each player's personal board, are the main engine of Lacrimosa and represent the memories of the moments lived with Mozart and his work, which you will sponsor. Throughout the rounds, you will obtain new cards that will improve your personal deck through two available actions: document memories and commission a composition.

Fulfilling the wishes of the royal courts will also bring you benefits when you travel with Mozart across Europe. If you are attentive to the tastes of the monarchs and sponsor his favorite compositions (opera, religious music, symphonies or chamber music) you will achieve important benefits. You'll also earn Prestige Points if you pay attention to the Round Bonus Cards, which will reward you based on what actions you take at the end of a round.

Lacrimosa is a stylish management game that can also be enjoyed solo. In this mode, a player faces the producer, actor and playwright Emanuel Schikaneder, whom he can challenge in three possible difficulty levels.

Wolfgang Amadeus Mozart was a key figure in the history of Western music, influencing several generations after his early death. Lacrimosa is a great tribute to the Austrian composer, which brings us closer to his life and his work through a fun and challenging experience. Will you be able to honor his legacy and pass down to posterity with him?