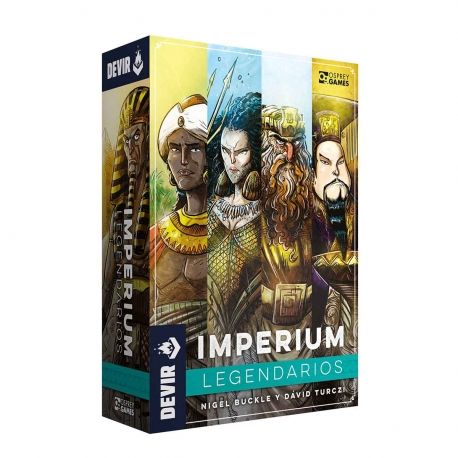 In your hands lies the fate of one of history's best-known mythical civilizations. Lead Arthurians, Atlanteans, Egyptians, Mauryans, Minoans, Olmecs, Qin, or Utopians and become the most prosperous empire the world has ever seen. Designed by Nigel Buckle and David Turczi and illustrated by Mihajlo Dimitrievski (The Mico), Imperium: Legendaries can be enjoyed solo or in a group of up to 4 people, ages 14 and up, in games that last around 40 minutes per player. It is an independent title but combinable with Imperium: Classics.

With a core deck-building mechanic, players will choose one of the nations included in the box and battle their rivals to score the most victory points possible. Each nation has its own deck of cards and characteristics that make them unique, so there are tons of possibilities open to players, no two games will ever be the same!

At first, players will take control of young, sprawling nations that aspire to become empires. Throughout the turns, the players will add cards to their game deck that will reflect this evolution. The game is played in rounds in which the players will alternate turns. On their turns, players must choose what to do: activate, innovate, or rebel. Activate will serve to carry out actions, innovate to take new cards and rebel to discard the annoying riot cards. Good hand management is essential to prosper!

Throughout the turns, players will expand their territories, subjugate other nations, develop science and technology, or foster trade, among other actions. All this will bring victory points, while they go from being barbarian tribes to consolidated empires. The game can end in one of two ways: with a scoring phase, when certain decks run out, or when a collapse occurs. In the first case, whoever adds the most victory points will win. But if a collapse is triggered, players must compare the number of riot cards they have: the player with the fewest wins the game. Prospering is just as important as avoiding chaos!
With a very immersive theme, Imperium: Legendaries offers a very satisfying balance between setting and game mechanics. Additionally, Imperium: Legendaries decks can be combined with those from the Imperium: Classics box set, allowing players to use any of the 16 available nations in a match. Each civilization stands out for having particular strategies, so exploiting the potential of each of them and putting them to the test against different rival nations promises hours of entertainment