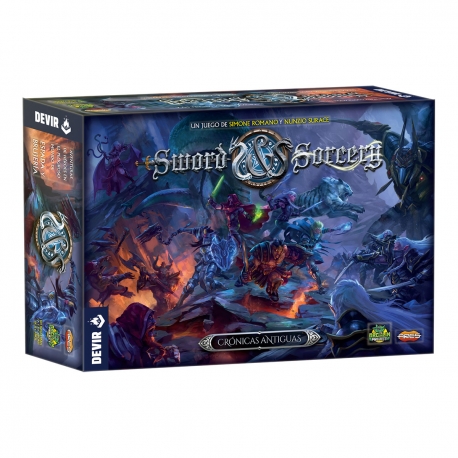 Epic fantasy adventures are back... in a big box! Ancient Chronicles is a new Sword & Sorcery adventure, standalone but compatible with its predecessor, Immortal Souls

By buying this product you can collect up to 12 loyalty points. Your cart will total 12 points that can be converted into a voucher of 1,20 €.

Epic fantasy adventures are back... in a big box! Ancient Chronicles is a new Sword & Sorcery adventure, standalone but compatible with its predecessor, Immortal Souls. This cooperative dungeon crawler designed by Simone Romano and Nunzio Surace can be enjoyed alone or with groups of up to 5 heroes, ages 12 and up, who will face the dark hordes in a multi-scenario campaign or on individual adventures.

Veterans and new discoverers of Sword & Sorcery alike will enjoy one of the greatest dungeon crawling sagas ever published. Just as in Immortal Souls, in Ancient Chronicles players will embody legendary heroes of the past who return from their eternal rest to face the darkness once more. This time, your goal will be to destroy the corrupted deities scattered throughout the Underrealm, a starless world under a stone roof, filled with dangerous ruins, sinister caves, and exotic cities.

The box includes 30 figures, 280 cards, 20 double-sided map pieces and multiple adventures with lots of decisions to make and alternative outcomes that promise many hours of fun. The five new heroes that players will be able to control are Jeanne, a warrior priestess who can become an avenger or an inquisitor; the elf Artemis, who can be an explorer or a hunter; Robin, alchemist or thief; the dwarf Thorgren, gladiator or stonerager; and Xantares, a mystical elf who can become an illusionist or wild magician. Depending on the nature that the players choose (order, neutral or chaos) their characters will specialize in one class or another.

The heroes must face new threats, as never-before-seen creatures lurk in the darkness of the worlds of Sword & Sorcery. Terrible spiders, minotaurs or enormous serpents, among others, will test the courage and determination of the adventurers. Thanks to the system of controlling the actions of the enemies, which works through cards, no player will have to assume the role of game director.

Throughout the game, you will live risky combat, you will explore unique scenarios and you will have unexpected encounters. It's up to you which way to go, which doors to open and which chests to search. But hurry, because each adventure has a maximum number of turns, represented by the event deck, in which you must complete a certain initial objective.

Ancient Chronicles is a standalone box but fully compatible with Immortal Souls and its expansions. That means if you have both, you can combine heroes, enemies, items, or even map pieces from both versions to create unique, fully customized adventures.

Whether alone or with a group, Ancient Chronicles will have you living epic adventures of sword and sorcery in a totally immersive environment. Unleash your inner hero and once again defeat the darkness that threatens the world.