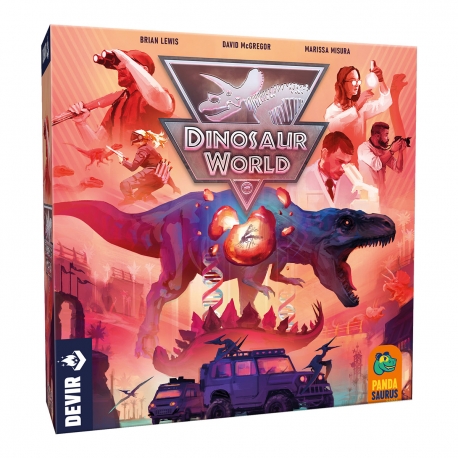 Science has triumphed. Science has managed to manipulate the DNA of dinosaurs to bring them back to life: this scientific advance is in the public domain

Science has triumphed. Science has managed to manipulate the DNA of dinosaurs to bring them back to life: this scientific advance is in the public domain. And there have been many dinosaur parks that have opened around the world, competing with each other to be the best park. Many have opened even before finishing their work. Customers abound and the excitement of seeing giant creatures fills the parks. But be very careful with security! It's not all good news, and tragedies lurk in every park. Welcome to the wonders of Dinosaur World.

Dinosaur World is designed by Brain Lewis, co-creator of the original game Dinosaur Planet and its expansion, Totally Liquid. Also involved in the game's creation were Marissa Misura and David McGregor, co-designers of the dungeon crawler Fungeon Party. It is a eurogame between 60-120 minutes long for up to 4 players. It has been originally published, like its prequel, by the publisher Pandasaurus Games. The art is provided by Kwanchai Moriya, Joe Shawcross and Andrew Thompson, old acquaintances from the gaming world.

In each of the rounds of the Dinosaur World game you will have several aspects to take into account: hiring new workers for the park, building and acquiring improvements to it, and new DNA samples to differentiate yourself from the rest.

Each of the players start the park project with the aim of attracting and hiring staff to work on it. These workers are hired to carry out different actions trying to make the best dinosaur park a reality. In the initial actions we must acquire DNA to create an ecosystem of dinosaurs and the construction of the necessary enclosures to house them. But we must be very careful controlling security so that misfortunes do not happen! It is normal that in the case of carnivorous giants some misfortunes happen, but we must control the number of deaths or we will lose the game.

Other aspects to take into account: large buildings to house visitors and all the necessary services for their comfort, improving the facilities or creating exhibits of dinosaur specimens are some of the things that we must take into account in this race to get the best Jurassic Park. Many of the buildings are public, and buying it can leave a more powerful one on the market, leaving it to your rivals on a platter. What to build is just as important as knowing when to build it!