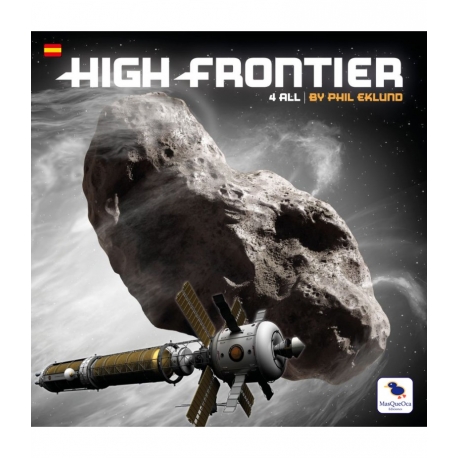 By buying this product you can collect up to 12 loyalty points. Your cart will total 12 points that can be converted into a voucher of 1,20 €.

We are undoubtedly facing the most realistic playful simulation of space travel ever created. Design your own rocket to explore and industrialize our solar system. You will need to find water to serve as the reaction mass for your rockets. Then you will have to found alien factories and make products impossible to create on earth. The High Frontier 4th Edition is the culmination of 4 decades of design and development work!

In the near future, nanofabrication techniques will make it possible to build incredible materials atom by atom. But they can only be built in the vacuum and zero gravity conditions found in space. Several private and government companies are competing to establish a mechanosynthesis factory on a carbon-fueled asteroid.

To do this, they accumulate water tanks in fuel tanks in orbit that will serve as propellant for the rockets. They'll also need remote-controlled robonauts to do the heavy lifting. In low orbits, the key to success is water. First the water will be transported from the earth at a high cost. But the water can later be removed at much less cost from the Moon of Mars, or from other hydrated objects. The extraction of resources in the chosen place is called In-Situ Resource Utilization (ISRU). Whoever develops the ISRU technology that can draw water from space instead of Earth will have a strategic footing to make money through exoglobalization.

High Frontier 4 All is a space exploration game at its core. On each turn you perform 1 action (called an operation) and 1 move (as long as you launched a rocket). Throughout the game, you use an engine building mechanism to combine different components (called patent cards) into a rocket or sail. The spirit and dangers of exploration and prospecting are recreated with the icons on the map. The entire galaxy is at your fingertips, but your unique rocket, refinery, and robonaut designs determine the best places to attempt glory, prospecting, industrialization, and the eventual colonization of other planets. The products of the factories you produce will guide your strategy throughout the game.

The mechanics may be relatively simple, but the combinations of layouts and explorations ensure that no two games will be the same.

Victory Points are gained primarily through the number of tiles on the final map, the scientific value of your colonies, and the stock prices of your factory. The modules introduce other paths to victory, including politics, space colonies, starships, and special missions called futures.

High Frontier is a no-compromise hard science game, but with an emphasis on narrative experiences. This has the effect of creating unscripted stories while playing against the harsh realities of space as much as your opponents. You won't find a more detailed map of the solar system anywhere, and the physics are real enough to make you feel like you're part of real stories and missions.

This is the 4th edition of the most famous game by the iconic Phil Eklund and it will be available, for the first time, fully translated into our language. Only available in its deluxe version, which includes the base game, Module 1 and Module 2, all within the same box.

This terawatt module introduces two new patent decks: Freighters and GW Thrusters. Freighters are a new type of charter that allow you to transport valuable goods from Factories to LEO. GW Thrusters are more powerful and efficient versions of the MW Thrusters from the base game, allowing your Spaceship to more easily reach the outer planets. This module also introduces Futures as an option, special missions to get victory points. This module is included in the Spanish deluxe version

This colonization module introduces space orbital stations, called Bernales, and space pioneers, called Colonos. These two types of cards expand the base game to go further in the industrialization and exploitation of the resources of the solar system and to colonize and settle the length and breadth of it. The Bernales improve your Colonies and give you extra VP, according to the Hydration of the Factories with which they are related. They also serve to obtain Settlers, which you can take to Locations to perform additional Operations there. This module is included in the Spanish deluxe version

• 1 political assembly board of the sun

• 20 Bernales Figures (2 of each type in each player color). These Figures represent 2 types of orbital space colony designs (Kalpana and Stanford), used to house the families of the Colonists you hire.