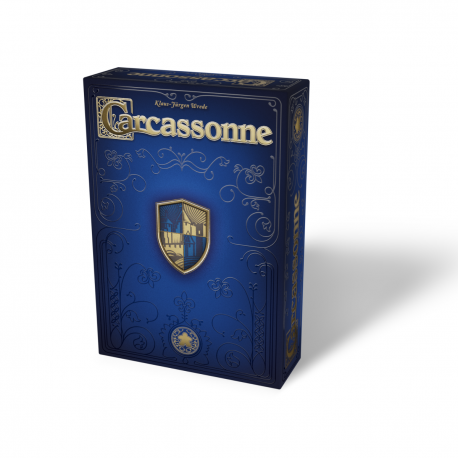 The long-awaited 20th anniversary edition of Carcassonne finally hits the stores: new tiles, unpublished illustrations, customizable meeples in a deluxe edition ... with the same gameplay as ever! Thousands of hours of fun in the new box of the classic game of tile laying!

The long-awaited 20th anniversary edition of Carcassonne finally hits the stores: new tiles, unpublished illustrations, customizable meeples in a deluxe edition ... with the same gameplay as ever! Thousands of hours of fun in the new box of the classic game of tile laying!

Carcassonne, one of the most influential and played games in the world turns 20, and at Devir we want to celebrate it in style. Carcassonne was designed in 2000 by one of the best authors on the entertainment scene: Klaus-Jürgen Wrede. After 20 years, thousands of copies sold all over the world, expansions and versions of the game The definitive box arrives for the celebration of this anniversary in the world of board games!

The Carcassonne 20th Anniversary Edition, a classic of our time, comes in a deluxe edition with a new box with a special design. As usual, the game includes 72 territory tiles. But to celebrate this special occasion, each of them includes beautiful details in the illustrations that will delight players, whether they are veterans or newcomers who are approaching the walled French city for the first time.

In addition, the 12 traditional tiles of the mini-expansion of the river become 17, including a double-spring tile. To celebrate the 20th anniversary we have included a new mini-expansion consisting of 15 tiles (combined with the 5 new river tiles for a total of 20 additional tiles). This is our tribute to the first 3 big expansions in the game.

The Carcassonne anniversary edition includes the classic 40 meeples, in the traditional colors red, yellow, green, blue and black. To do something different, the Carcassonne 20th Anniversary Edition includes some new stickers for you to personalize as you prefer. And if what you like is to play with them in the classic way, you don't have to use them ... The choice is yours!

The regulations have been completely redesigned, improving the wording and layout. The papyrus-like paper now unfolds making it very easy to read and understand. Finally, the Carcassonne 20th anniversary box includes a new insert to store all the tiles included in the game. Not only does it have a new design but you will be able to organize all the content in the most optimal way possible. Don't miss out on your copy of Carcassonne 20! anniversary!

21 other products in the same category: