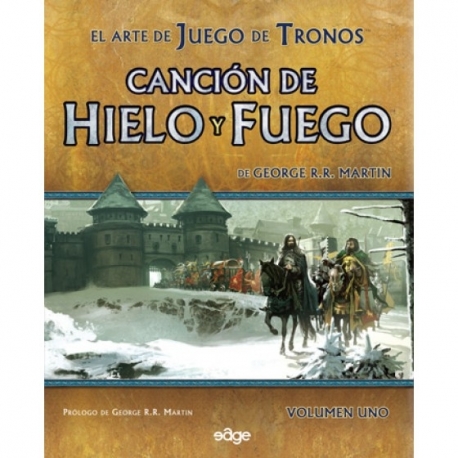 Some of the world's greatest talents in fantasy illustration invite you to explore the lands of Westeros and beyond like never before.

From the frozen wastes beyond the Wall to sunny Dorne, and from the rugged and brutal Iron Islands to the exotic cities of the East, the mesmerizing landscapes and memorable characters of the popular George RR Martin's saga of novels come to life in this exceptional collection.

March to the Wall alongside Jon Snow and the Sworn Brothers of the Night's Watch, and face the fearsome power of the savage hordes and the chilling threat of the Others. Follow Robb Stark's desperate campaign in the North, from the snowy Whispering Wood to the verdant shores of the Trident. Stand by Eddard Stark as he debates in the Privy Council and falls prey to Varys the Spider and Cersei Lannister's webs of intrigue and deceit in King's Landing. He rides after the great kahalasar of Daenerys Targaryen, launched to conquer the Free Cities along the Narrow Sea.

The art of Game of Thrones: A Song of Ice and Fire, by George RR Martin reproduces with great luxury the careful illustrations of renowned artists such as Jim Burns, John Howe, Steve Stone, Charles Vess, Stephen Youll, and many more. The unforgettable images in this volume are taken from book covers, special editions, comics, board and card games, concept art, and fan creations personally selected by George RR Martin from the thousands of illustrations his work has inspired.