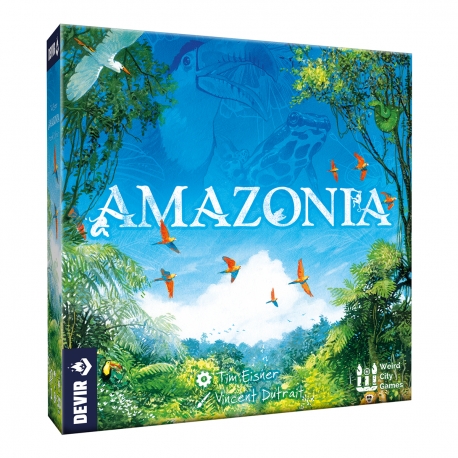 In Amazonia, players compete to create the most abundant tropical forest over 3 rounds.

Amazonia is a card game for 1 to 4 players, ages 8 and up, designed by Tim Eisner and illustrated by Vincent Dutrait. With draft and collection mechanics, in Amazonia players compete to create the most abundant tropical forest over the course of 3 rounds. The jungle ecosystem is full of symbiotic relationships between flora and fauna, so players must grow trees, plant lush vegetation and attract the most diverse and exotic animals to achieve the highest score. But be careful, because in the deck there are also dangers such as fire, disease or drought.

Learning to play and preparing the game will take you very little time. Soon you will be creating your particular tropical ecosystem! To start, put aside the point tokens and shuffle the seed and jungle decks separately. You will divide this last deck into 3 similar piles, which will correspond to each of the 3 stations or rounds in which the game will be divided. From the deck corresponding to the first season, take six cards and distribute them face down on the new growth spaces in three columns (the first with one card, the second with two and the third with three). The last player to water a plant starts the game.

To expand the forest, players take turns taking growth cards from the central market. During his turn, a player can look at the stacks in order and decide whether to keep it or not. If he doesn't keep it, add a card from the face-down deck to that pile and look at the next one. If, on the other hand, he wants to keep it, he takes all the cards and places them in his playing area. Thus, the players shape their tropical jungle. Tree, vegetation or wildlife cards award points at the end of each season and in some cases also have immediate effects. The turns continue until the cards in the deck are exhausted, at which point a scoring phase is carried out.

After the three seasons, the player with the most exuberant forest, that is, who has accumulated the most points throughout the rounds, wins the game. There are point bonuses for whoever has the most trees or the tallest trunk, for sunny and rainy weather card combinations, and certain pairs of plants and animals. The fire, drought and disease cards will subtract points from you... But they may also affect your rival. In Amazonia, there are several possible strategies and more than one path to victory!

Exploring the deck and finding the best possible combinations will become quite a challenge, also solo. And all this in a portable format and with a very careful and realistic art. Amazonia is a game that will delight both the most casual and the most experienced in the world of board games, with a very particular theme: you will feel like you are building your own jungle!