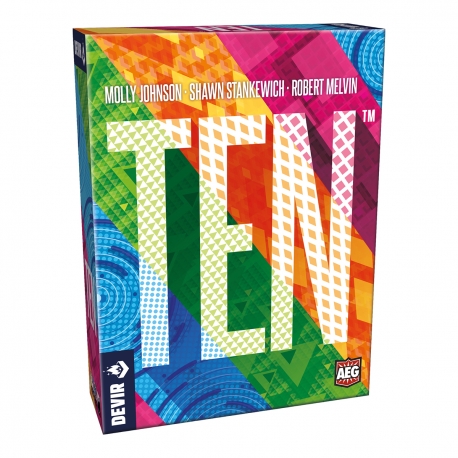 Count to ten and, above all, don't overdo it!

TEN is a game by Molly Johnson, Shawn Stankewich and Robert Molvin that can be played by between 1 and 5 people, ages 12 and up, in games that last between 20 and 30 minutes. The goal of TEN is to score the most points by creating the longest sequence of consecutive numbers in different color rows.

Learning the rules will not take you more than 10 minutes, which is why TEN is an ideal title to play with both family and friends. Throughout the game, players will push their luck and participate in auctions to get the cards that most interest them to complete the sequences of numbers in the color rows.

To start the game, adjust the number of cards to the number of players, distribute 5 currency tokens to each participant and choose the starting player. Going clockwise, each player spends his turn drawing cards from the center deck. As number cards or currency cards are drawn, they are spread out in the center of the table. However, if a joker card appears, the turn is interrupted and an auction between all the players begins. Whoever bets the most chips will keep the wild card.

If no jokers appear, players can draw as many cards as they like until they either decide to stop (to take either all the number cards or all the currency cards as a reward) or cause a bust. Bankruptcy occurs when the sum of the number cards or the sum of the currency cards displayed on the table exceeds the value of 10. How far are you willing to tempt fate to get the card that makes you lack?

In case of causing a bankruptcy, the player receives a bankruptcy token, which is equal to three coins, while the rest of the players share the currency tokens that have been displayed on the table. If the player completes his turn without causing a bust (either because an auction has occurred or because he has decided to take cards) the player can, optionally, buy a card from the common market (where the cards that come out of the deck are stacked and that are not claimed by the rest of the players). Spend your coins and unwanted cards (which add +1 to your tokens) to buy at the market.

The turns continue until the cards in the central deck are exhausted and a final round is played to buy cards in the market. The fish is already sold! The player with the most sequences of number cards in different color rows wins.

In the regulation you will find variants to adapt the difficulty and also the challenge to play alone. TEN offers versatility and hours of fun to play with all types of audiences. Who will risk more to get the best card? How far are you willing to bet to prevent your opponents from getting the best cards? Count to ten and, above all, don't overdo it!