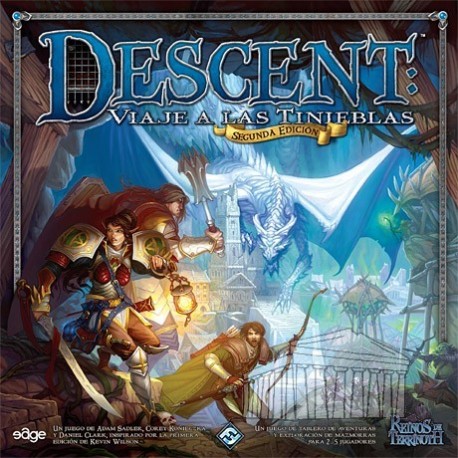 Gathers a group of heroes and begins a new adventure to defeat evil.

An ambitious Supreme Lord gathers his minions in the darkest depths of Terrinoth, preparing to besiege the surface world. Only a group of gifted heroes of great courage and to have any hope of saving the region of the icy clutches of the tyrant. It is time to venture into the darkness and thwart the nefarious plans of the Supreme Lord before it's too late ...

Descent: Journeys in the Dark (Second Edition) is a board game for groups of 2-5 players. One assumes the role of the evil overlord, and the other controlled brave heroes. During each game heroes undertake dangerous adventures deep into caves, ancient ruins, dark dungeons and cursed forests. Along the way they will face monsters, accumulate wealth and seek to thwart the evil plans of the Supreme Lord. This second edition of Descent: Journeys in the Dark board includes modular pieces of double sided endless combinations of heroes and skills and surround a campaign argument that will carry the heroes to an epic fantasy world where you must join forces against an ancient evil.

The legacy of the first installment of Descent: Journeys in the Dark is developed with this new edition, which reinvents the classic experience with an epic campaign system simple rules to represent highly dynamic tactical battles. Over a series of exciting adventures with a strong story component, our heroes must accumulate power and experience in order to prepare for the grand finale duel against the wily Supreme Lord. But besides that, any of the adventures included can also be enjoyed as a single separate item.

With 39 miniatures, over 200 letters, almost 50 pieces of board and more, Descent: Journeys in the Dark is the perfect game for unlimited adventures!

From simplifying the line of sight to the agility of preparations of each meeting, the second edition of Descent: Journeys in the Dark offers a gaming experience as tense as satisfactory with minimal wait time. The defense dice attenuate the tendency to excessive calculations in the attacks, and to raise shorter adventures with abundant natural interludes have managed to adapt the game to all types of groups. And what's more, since all parameters needed effects include statements and conveniently described in their respective letters, not even need to get the rulebook of the box to play!

For all this, coupled with intuitive new control mechanics for the vile powers of the Supreme Lord, the new edition of Descent: Journeys in the Dark offers the same degree of tactical challenge than its predecessor, while it is more affordable than ever . Instead of accumulating chips Threat to spend on traps, minions and other tricks for heroes, the Supreme Lord can play cards from your hand if you meet their simple conditions. Draw cards each turn, add them to your hand and use them when it suits you!

The selection process and creating characters in the second edition of Descent: Journeys in the Dark gives players the tools to build in a short time a group of adventurers perfectly suited to your play style tools.

Each player starts by choosing from one of four archetypes: Mage, Warrior, Ranger, or Healer. Each archetype includes several classes that offer different game experiences even within the same archetype. If you decide to be a warrior, you assume the role of the brave knight, which physically protects its weaker peers? Or maybe you play as the formidable Berserker to open a bloody trench between enemy lines?

With experience improved system of the second edition have full control over the development of your character. Each class has its own deck of cards of skill, and take the path of your hero to greatness is as simple as choosing your starting skills. As you gain experience in the campaign that is included in the basic box, you can invest in acquiring additional skills that complement the capabilities of your adventurer. For example, if you chose the Warrior archetype and Berserker class, you could specialize in eliminating multiple enemies at once, or maybe you prefer to be able to deal devastating blows to individual combatants. These and many other options are what make the system fast and intuitive character of the second edition of Descent.

Embark on a dangerous campaign against evil

The new edition of Descent: Journeys in the Dark theme includes an exciting campaign that faces the greatest heroes of Terrinoth with the conspiracies of the mysterious overlord. When the heroes reach the idyllic old barony of Rhynn, find it besieged by a vast horde of ferocious monsters and black magic. Will they uncover the real horrors that lie behind the alarming inroads?

This campaign consists of numerous encounters that can be played as individual experiences or as part of a series of adventures interrelated rules that allow you to adjust the items to any number of players. And not only that, the storyline of the campaign varies depending on the successes and failures of adventurers! Did you come out alive from the dungeon, but you could not complete an objective of vital importance? Your failure could have strengthened an enemy that still desconocéis, or maybe you deprive yourself of a chance in the future (even if you do not leave any of gaining experience points). The plot branches follow a brilliant design, and gripping narrative of encounters promotes a genuine impression that your decisions have an impact in a fantasy world ... one whose only hope is you.

11 other products in the same category: