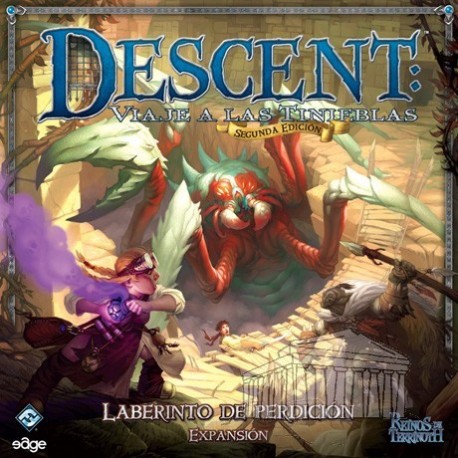 The Labyrinth of perdition expansion is packed with new adventures, monsters, classes and relics to live hours of exciting adventures!

Temporarily out of stock

Notify me when available

Game recommended for over 14 years.

An ancient city full of danger and mystery awaits Sudanya in the ruins of a lost civilization in Terrinoth limits. Horrible creatures stalk the heroes in each of its steps, but powerful allies will guide you through the maze naturally twisted and broken city.

Experience an exciting new campaign to Descent: Journeys in the Dark (second edition). The Labyrinth of perdition expansion is packed with new adventures, monsters, classes and relics to live hours of exciting adventures!

Set in a region of Terrinoth not yet been explored, the maze of destruction expansion takes players to take an exciting trip to the ruins of a forgotten city. Throughout the many adventures included in this expansion, the heroes will have the unique opportunity to recruit allies to help them in their quest to stop the evil overlord.

With 17 plastic miniatures, 18 pieces of board, more than 100 cards and more, Labyrinth of perdition is the perfect addition to your collection of Descent: Journeys in the Dark!

Riding the Bullet (second edition) you are required to play Descent.

Edge Entertainment presents Labyrinth destruction, an expansion to Descent: Journeys in the Dark (second edition) having a completely new epic campaign, more new heroes, monsters, classes and more! Maze of destruction is set in a region of Terrinoth never before explored, and takes players on an exciting journey to the desolate remains of a forgotten city. Throughout the many adventures included in this expansion, the heroes get only the help of allies in his quest to stop the evil overlord.

The extensive campaign of destruction Maze contains nineteen adventures with intense narrative. And although they can be enjoyed as individual experiences, these exciting adventures are designed with a campaign structure in mind, telling the story of the evil plans of a mysterious witch to plunge the world into darkness.

Like "The Rune of Shadows" campaign of the basic box, Maze of perdition system it employs an elegant story that reacts to the successes and failures of the players. With each adventure successfully completed, will grow the power of the heroes or the Supreme Lord ... up to an electrifying showdown in the finale of the campaign!

Whether you choose to enjoy the entire campaign or not, the destruction deLaberinto content is designed to enhance your experience Descent: Journeys in the Dark (second edition). A new Overlord deck provides an alternative to fifteen letters Supreme Lord of the basic box, while the forces of evil are new and wily monsters ranks.

Heroes do not plan to sit still while the Supreme Lord performed his evil plan; Heroes benefit from the arrival of four new characters and four versatile new classes. The powerful Beastmaster is a hunter whose skill is unrivaled and he is ready to follow their prey for any terrain helped his faithful wolf.

Meanwhile, the greedy Relic Hunter getting gold highlights and discovering relics, but also more than capable of defending himself and his newfound riches if the situation so requires.

Those who will be attracted by the esoteric path of magic may prefer to bewitching a class penalizing able to get the minions of the Supreme Lord pay dearly every step they take. With an array of diseases, curses and other woes at its disposal, the haunting is a grim reminder that walking is the most questionable forms of magic can be used for good.

Finally, the versatile Apothecary is a traveling store elixirs, tonics and other concoctions.

However, it would be foolish to think that the apothecary is limited to dealing with potions, as many enemies have made that mistake before meeting choked by poisonous gas.

All this, plus new Event cards travel, state, and two dice Shop Green Power will ensure more customization and replay value than ever!