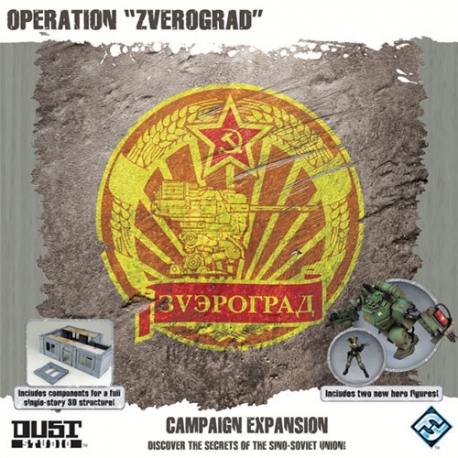 By buying this product you can collect up to 3 loyalty points. Your cart will total 3 points that can be converted into a voucher of 0,3 €.

Zverograd was once the pride of communist Russia. It was a city built to show the world the communist dream, but today the place has been reduced to rubble. Right now the Axis, the Allies and the USS face what remains of this city, hoping to claim the mysterious prize that is buried beneath its streets.


With all that is at stake, the USS has deployed its most famous agent, Koshka Rudinova, to defend the city. This one has arrived at the battlefield with "Grand'ma", its personalized walker. With Koshka's rounded vehicle and impressive combat skills, the USS still have a chance to fight for Zverograd.

Also included in Operation Zverograd are the rules for a whole new type of units in Dust Tactics: aircraft. These will change the way you play Dust Tactics. In addition, this campaign presents a set of modular constructions, as well as other new rules, scenarios and environmental information from the USS.

To play with Operation Cyclone you must have a copy of the basic game of Dust Tactics.