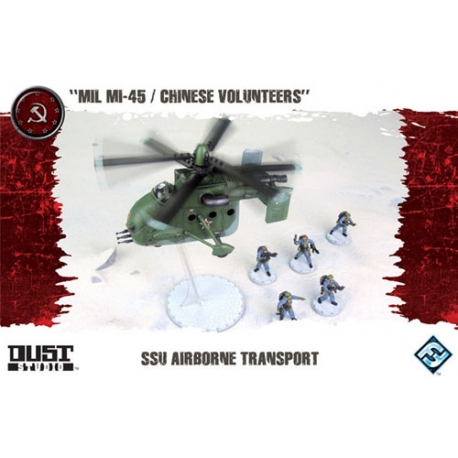 By buying this product you can collect up to 3 loyalty points. Your cart will total 3 points that can be converted into a voucher of 0,3 €.

MIL MI-45 is the basic mass production helicopter manufactured by the Sino-Soviet Union.

With enough firepower to deal with low-intensity enemy defenses, this transport is capable of securing a landing zone for its five Chinese Volunteers to launch into attack.

ENTER THE WORLD OF DUST!

The year is 1947. The war that began eight years ago has already spread to the whole world. The old alliances have been broken and new ones have been forged. There are three main blocks competing for supremacy: the Allies, the Axis and the Sino-Soviet Union (USS). Across the globe, these factions fight for a valuable resource: the VK. This mineral has led to the development of revolutionary weaponry, such as giant combat walkers, capable of dealing with the most advanced tanks.

Dust Tactics is a tactical miniature game for 2-4 players, developed on a board with squares. This box contains everything you need to play, including 28 great miniatures, 3D terrain elements and special dice. It also includes the Victory Bridge campaign, a scenario book to play the Battle of Cobden Bridge, a strategic crossroads in southern England. Lead the Allied or Axis forces and create an army with the units you have to deal with your enemy on the battlefield and shout "Victory!"