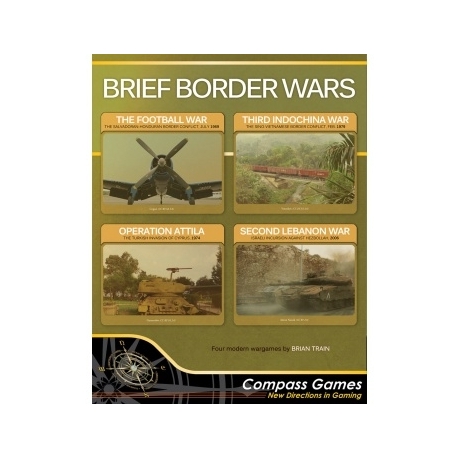 Brief Border Wars is a quadrigame or set of four mini-games on short border conflicts of the 20th and 21st century, using a card-driven system that models the chaotic, stop-and-start nature of these impromptu wars. The four conflicts include: El Salvador vs. Honduras, 1969 (also known as 'The Football War') The Turkish invasion of Cyprus, 1974 China vs. Vietnam, 1979 Israel vs. Hezbollah, southern Lebanon, 2006 The Turkish player in the Cyprus game must establish and exploit from a beachhead the Chinese player in the Vietnam game must contend with determined guerrillas and a fatal division of effort between two non-communicating fronts and the Israeli player in the Lebanon game must seek out and destroy the Hezbollah rocket and missile units raining destruction on the homeland.