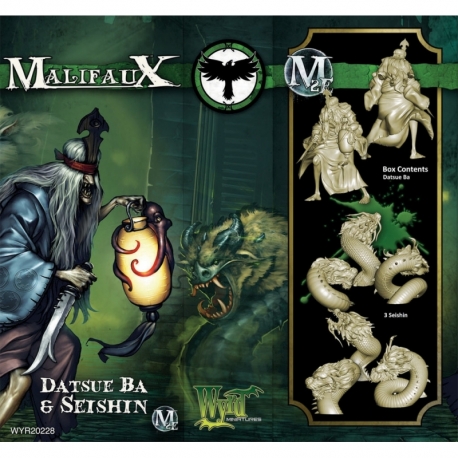 Before the dead from the Three Kingdoms can cross into the afterlife by crossing the river Sanzu, they must first face the judge of souls. Though she shuffles along like a withered old crone, the Datsue-Ba is quite capable of catching the most reluctant of souls waiting for judgment. Her bond with the river means that a hissed curse leaves her victims unable to flee as she draws near them.

With a cruel looking blade she peels away skin and cloth alike to be weighed. She use to take great delight in punishing her victims for their crimes. Few souls escaped her clutches unscathed.

Since being drawn to Kirai, who she sees as a living embodiment of judgment, the Datsue-Ba has begun judging souls before they are dead. She flays innocent and guilty alike, trapping the guilty in the Soulstones empowering her lantern, while condemning the innocent roam the world as tormented spirits, unable to slake the thirsts they had in life.

As the spirits of the departed dissolve into the aether, the scraps of sentience swirling away can be drawn into the physical world as Seishin.

Swirling and howling, they are torn from what should have been finality to serve one, last purpose.

These spirits often appear as small dragons, though this may be because they are most often called on by Kirai, who prefers that form. They are not able to function as fully independent entities, being too limited in both intelligence and spiritual power. They can however be used as simple messengers and scouts, returning to their master when threatened, or having completed their assigned task.

They are also used as sacrificial tools in various rituals. Seishin live brief, servile existences before boiling away into the aether again, their inglorious ends often coming at the hands of their own master.