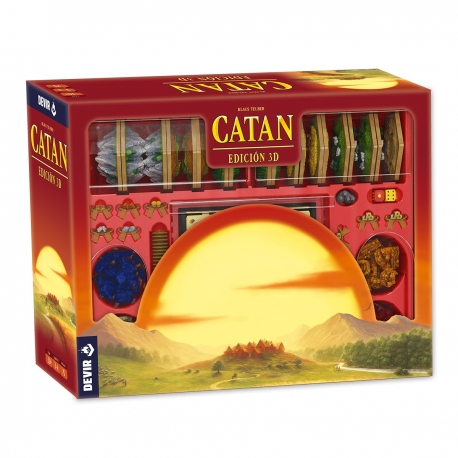 Explore a new dimension with Catan 3D! The classic colonization and resource management game levels up in an edition with deluxe components. The terrain tiles are raised in small, detailed models that have been sculpted and hand-painted by the game's creator, Klaus Teuber.

Catan 3D is a deluxe commemorative edition of the basic version of the game. The land, coast and port tiles in this title are small models in relief, reproducing the design sculpted and hand painted by its creator, Klaus Teuber. The player components have also been redesigned with an aged look, which adds character and depth to each game.

The Catan 3D edition reproduces the rules of the original version of the classic colonization and resource management game, but offers the most immersive gaming experience of all the variants and expansions of the series released to date. Each player will compete to be the first to reach 10 victory points by building roads, settlements, cities and adding development cards. For this, it will be vital to collect and combine the five types of resources that the island offers: wood, which is cut from the forests; clay, which is produced in the hills; wool, which is obtained from sheep that are in the pasture; cereals, which are grown in the fields and minerals, which are chopped in the mountains.

The hexagons where these resources are found, which form the base of the board, are assigned numbers between 2 and 12 that correspond to the combination of results of a roll of two 6-sided dice. Each turn, players will roll the dice and determine which regions produce resources. Those players who have a settlement adjacent to that region will obtain that resource. As is logical, there will be combinations of numbers that are more frequent and others that will be less frequent, with which there will be resources that will have a lower probability of being generated. If a player rolls the most common result, the number 7, it will cause a thief to move, blocking one of the hexes and stealing resources.

In addition to management, players have the ability to trade through the ports that are located at the ends of the island or between them. Bargaining will often be the most effective way to secure scarce but necessary resources. However, the advantages and risks of providing a rival with that precious resource that it is worth completing a road or upgrading one of its settlements to a city must be calculated very well. The balance between managing resources well and knowing how to interact with the rest of the players will be the key element to achieve victory.

In each new game, exploring and conquering the island of Catan will be a different experience, as the location of the hexes and the port tiles will vary, as will the position of the number combinations.

Catan, which recently celebrated its 25th birthday, has become a worldwide phenomenon, a classic among modern board games.

Now we put the icing on the cake with this deluxe edition in 3D, suitable for both collectors and new players.