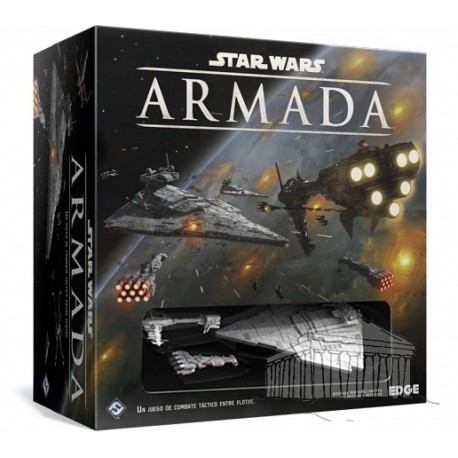 "We are in a period of civil war. Rebel spaceships attacking from a hidden base, have achieved their first victory against the evil Galactic Empire.

During the battle, Rebel spies have managed to seize the secret plans of the total and ultimate weapon of the Empire's Death Star, an armored space station with enough power to destroy an entire planet potential.

Pursued by the Empire's sinister agents, Princess Leia fly to his homeland aboard his spaceship carrying the stolen plans that can save her people and restore freedom to the galaxy ... "

Relive all this fantastic story to play miniature of the Star Wars saga.

Giant Star Destroyers come into battle against rebellious corvettes and frigates. Heavy turbolaser batteries discharged volleys of shooting squads X-wings and TIE fighters. The engineering staff is quick to divert additional power to the shields that are about to fail. The laser blasts and explosions glow around the battlefield. Even a lone ship may be able to change the course of battle.

In Star Wars: Armada, you assume the role of an admiral commanding a fleet belonging to the Imperial Navy or the Rebel Alliance. First you must gather warships with which you want to confront the enemy. Then, using the tracer innovative course that brings the basic Box game, you marcarás the route your ships will line the battlefield, even though there squadrons fluttering around. Finally, when these spacecraft began to exchange shots, you have the responsibility to assign tactical orders that will decide the course of the battle and perhaps the fate of the galaxy.

Star Wars: Navy is a tactical game for two players thumbnails epic battles between fleets in the Star Wars universe. Giant Star Destroyers come into battle against rebellious corvettes and frigates. Heavy turbolaser batteries discharged volleys of shooting squads X-wings and TIE fighters. As rebel and imperial fleets collide, yours is the responsibility of issuing appropriate orders that will decide the course of the battle and, ultimately, the fate of the galaxy.

Game not recommended for children under 14 years.

The basic box contains ten squads Navy unpainted prepainted three ships of war, almost a hundred letters a tracer innovative course, a rule reach six selectors orders nine custom attack dice and all the cards you might need for engage the enemy and fight for the fate of the galaxy.

28 other products in the same category: