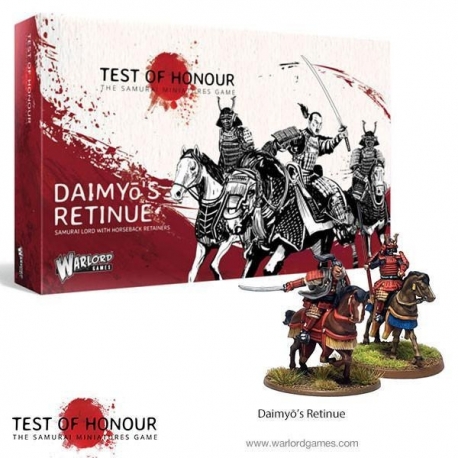 Ever confident of victory, Daimy? Osugawa charges recklessly into battle, leading his fearsome, masked retinue to spill the blood of his foes.

Mounted Retainers introduce a cheap mounted melee unit, while the Mounted Sergeant can give another mounted commoner an extra move, meaning 12" and shoot, 15" charge range or 18" total move!

There are new metal demon-masked helmets and 18 new cards in the set.

The 'Terrifying Visage' card means that enemies must pass a Test of Honour or lose 1 dice from their Avoid roll, while 'Momentum' allows you to draw the next token if you cut down an enemy.

Osugawa himself is arrogant and out for blood and glory - he charges 7" until he's managed to cut down an enemy samurai. And look out for the 'Self Confidence' Quest card - field 2 points less than allowed and still win the battle!