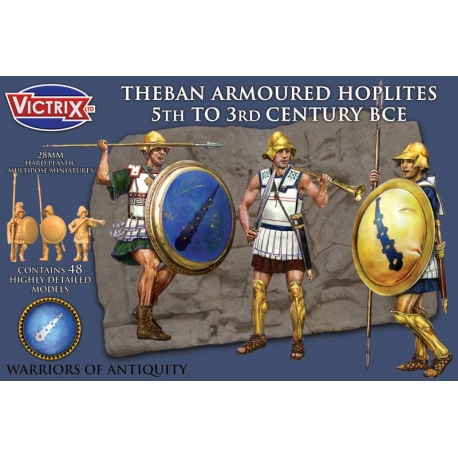 The Thebans are now on pre-order and orders will start shipping around the 19th/20th July.

This fantastic set of miniatures represents Greek Hoplites of Thebes Boitia and Thessaly from the 5th Century covering the end of the wars with Persia, to the 4th century and the titanic struggle for Greek supremacy in the Peloponnesian war against Athens, Thebes rise and battle for Hegemony over Greece and the destructive war against Macedonia .

You get 48 superbly detailed miniatures. The detail is crisp and sharp. There are 8 head variants. There are thrusting arms options, spear at rest options and sword arms. (Remember if you want to make more at rest arms, by rotating a thrusting arm 90 degrees it becomes a spear at rest position) There are 8 figures per sprue, 4 have shield arms attached and 4 have no arms attached to enable you to make the musician and other speciality positions for officers and character figures. There are cloaks and various sword scabbards to add even more character and flavour to your Hoplite miniatures. Making this set one of the finest detailed and versatile plastic sets on the market

This set can be mixed with all the parts from the other 3 Hoplite sets, Athenian, Spartan and Mercenary which all have their own speciality heads and options to add yet more variety to your Greek armies.

Included in the box is a fantastic flyer produced for us by Great Escape Games giving you unit statistics for your Ancient Thebans to work with their Ancient Rules ?Clash of Empires?, a superb set of rules that really capture the flavour of warfare in the ancient world.

We have also produced sets of shield transfers designed by steve at Little Big Men Studios. These are listed on the shopping cart and will really make your Theban shields stand out on the battlefield.(These are currently being worked on)