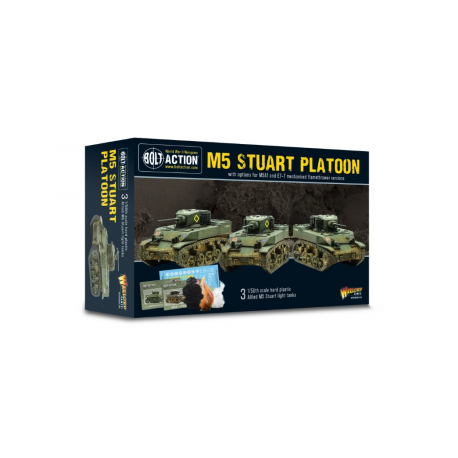 This new versatile plastic kit can be assembled as either the M5 Stuart, M5A1 Stuart or the E7-7 Mechanized Flamethrower and is suitable for many Bolt Action armies including the US, British, Soviet and Chinese. With this platoon set you get three of these tanks, which you can put together as you wish, regardless of whether you set up a platoon with three vehicles of a single variant or add one of each variant to your army at a discounted price compared to buying three vehicles individually would like.

The Americans preferred light tanks over armored vehicles for reconnaissance, and the M5 light tanks were designed for this role. The main difference from the earlier vehicle was the Cadillac engine. This required a revision of the armor and the opportunity was taken to improve the armor layout and distribution. In the M5A1 version, the lower tub casting was now up to 64 mm thick in places. Other improvements include wider access hatches, more interior space for the crew and ammunition storage space for 147 37 mm projectiles. Production was limited as the launch of the M24 light tank was imminent.

Although it counts as a light tank (damage value 8+) in Bolt Action, it benefits from the special rule Reinforced armor" for shots that hit the front of the vehicle, its armor rating is treated as 9+ instead."