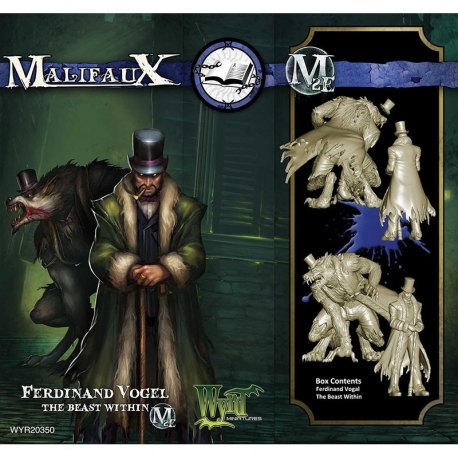 FERDINAND VOGEL AND BEAST WITHIN

Ferdinand Vogel and The Beast Within Information

Ferdinand Vogel came to Malifaux in the hope of opening a factory that would allow his family to expand their interests into Malifaux. One of his manufacturing partners betrayed him, however, and he was arrested by the Guild for a crime that he did not commit.

He escaped thanks to interference from the Order of the Chimera, who transformed Vogel into a feral beast, allowing him to tear his way free of the paddy wagon and escape into the darkened city streets. though he was eventually recaptured and forcibly transformed back into a man, Ferdinand was not defeated.

He Successfully argued his case to the Guild, earning himself an acquittal and his freedom. As soon as he was released, Ferdinand began searching for the people who turned him into a monster... and eventually, he found them.

Within Ferdinand Vogel is a terrible monster of unchecked fury and raw aggression. For a time, he was a slave to his desires, until a group of Guild Lawyers used their mastery of the law to lock the creature inside him away.

Once he had freed himself from prison, Vogel was contacted by the Order of the Chimera. Thought they did not admit waking the beast trapped within him, they did show him how to free it from the chains of the Guild had forced upon it. vogel revelled in the ability to unleash the beast at will and begun to look upon it not as a curse or a burden, but rather as an ally that shared his flesh.

In the shape of a beast, he hunted down all of his manufacturing partners in Malifaux, casting his net of slaughter wide to ensure that the one who betrayed him met his or her final end. When his vengeance and the beast's hunger were both sated, he returned to the Order of the Chimera to learn more about the strange path his life has taken... and, perhaps, how to give such a gift to others.

The Order of the Chimera welcomed him with open arms.