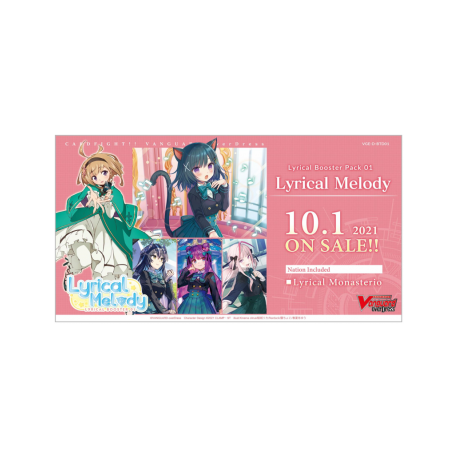 Players will be able to strengthen the Lyrical Trial Deck released a week earlier with this Lyrical Melody Booster with Grade 3 Ride Line units from various races, 5 types of Over Triggers, and units in their concert outfit to be included in each display!
The Lyrical Special Packs - 1 piece each of 7 types of LSP (Lyrical Special) cards - containing an original stunning illustration by the famed manga artist group CLAMP and 6 units in their concert outfit will be randomly included as well! Not forgetting 5 types of LSR (Lyrical Secret Rare) cards too!
As a pre-order bonus, players can look forward to the box topper, which features 1 out of 4 designs of D4DJ FIGHTER-S COUNTER, a collaboration with the Lyrical Lily DJ unit from D4DJ, to be randomly included in each display!
Featuring:
5 Ride Lines! 3 types each of Critical Trigger, Draw Trigger, Front Trigger, and Heal Trigger! 5 types of Sentinels with the same ability hastens your journey of deck construction too! Following the footsteps of Genesis of the Five Greats" and "A Brush with the Legends", 1 SP will be included in each box as well! LSR (Lyrical Secret Rare) or Lyrical Special Pack will be included randomly! 7 types of LSP (Lyrical Special) featuring the 6 gorgeous units and 1 original card illustration by the world-renowned CLAMP! -Lyrical Special Pack is a pack that includes 1 piece each of 7 types of LSP (Lyrical Special)
PRE-ORDER BOX TOPPER BONUS if you order by the deadline!
D4DJ FIGHTER-S COUNTER in collaboration with the Lyrical Lily DJ unit from D4DJ! 1 out of 4 designs will be included randomly in each display!
-While stocks last! Product Specifications 1 pack contains 7 random cards 1 display contains 16 packs 120 types of cards (120 new cards) (RRR: 10 / RR: 12 / ORR: 5 / R: 30 / C: 63) + Parallels: 112 types (LSR: 5 + LSP: 7 + SP: 50 + H: 50) 2 cards in every pack will definitely be R or above cards!!"