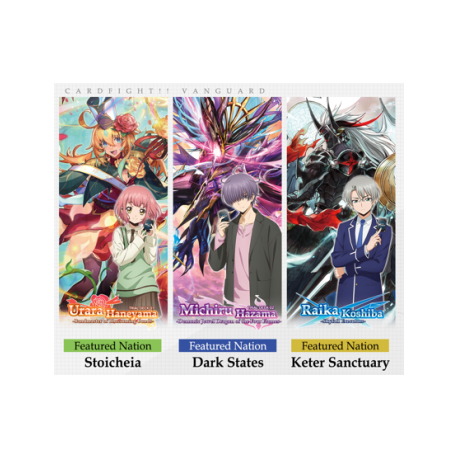 Introducing the three features of the Trial Decks!

Each pre-constructed deck consists of 50 cards, including Tutorial cards with rule explanations instead of card abilities! These decks are perfect for learning and teaching! These Trial Decks also contain a new First Guide and Play Sheet as well, making it the perfect product for starting Vanguard!

Power up your deck with the included Expansion Pack!

Included within the 12-card Expansion Pack are Tutorial cards with added abilities, including those used in the Ride Line!

Convenient Packaging that can also be used as a Deck Holder!

These Trial Decks feature packaging that can also be used as a deck holder! The deck holder is capable of holding up to 50 sleeved cards! Players who are not familiar with card supplies no longer need to worry!