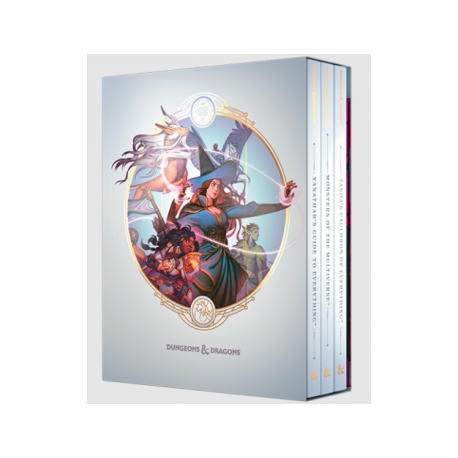 Wizards of the Coast

Crafted for DMs and players alike, this collection brings together all the fifth edition rules expansion books in one set, complete with a beautiful new Dungeon Master?s screen. Includes fifth edition?s best-selling rules expansions Xanathar?s Guide to Everything, Tasha?s Cauldron of Everything, and Monsters of the Multiverse, along with a Dungeon Master?s screen together for the first time in a beautiful slip case. Includes the debut of Monsters of the Multiverse, a comprehensive resource for players and Dungeon Masters alike, containing over 30 updated player character races and a massive bestiary with over 250 redesigned monsters and stat blocks, all for use in any D&D world. Each of the three books and the Dungeon Master?s screen feature special foil covers, available only with this release. A perfect set for players and Dungeon Masters looking to expand their game with additional rules and character options.