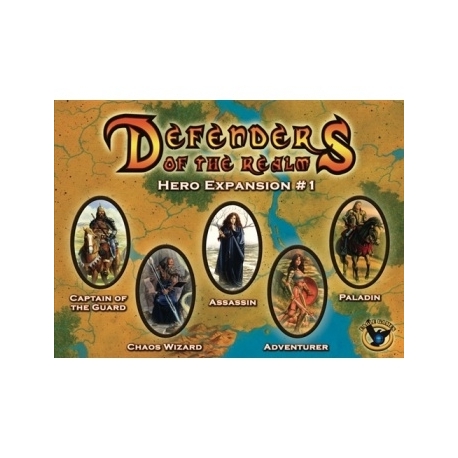 ?Sire, the war is not going well. We need to move you and the Queen from Monarch City as quickly as possible.? ?Now is not the time to flee, but rather the time to fight!? the King announced as he looked each of his advisors one by one in the eyes. ?Send fast riders to all corners of the Realm, seeking more heroes to come to our aid. Call for the Captain of the Guard and have him gather his elite troops?we will stand against these invaders. Monarch City shall not fall!? Here are four new Heroes with matching Character Cards (Adventurer, Assassin, Captain of the Guard and the Chaos Wizard) who have come to help defend Monarch City each with special powers. There are no new rules, simply add the cards and tokens to the base game. A new Paladin miniature will replace the base game Paladin. Global Effects Cards should be added to the Global Effects Cards from the other Expansions to create one ?Good? and one ?Bad? Global Effects Deck. Several cards from each deck are added to the Darkness Spreads Deck and will change play in a thematic way. Options allow players to increase or decrease the level of difficulty. Now answer the King?s call to defend Monarch City!