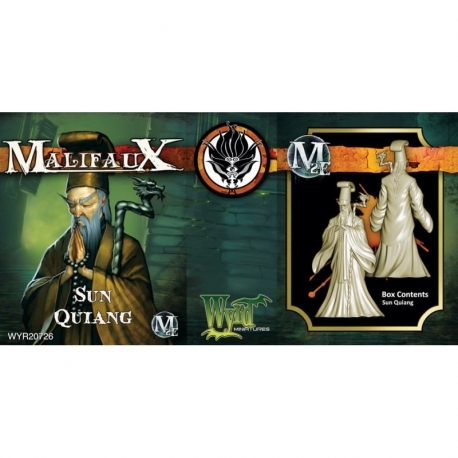 Sun Quiang is a famed healer from the Three Kingdoms. He is an expert in the arts of medicine, and his talents were sought from across the land by the sick and the dying.

The Guild arrested his son on false charges of treason and the sale of illegal weapons. Desperate, Sun Quiang sought the aid of the dreaded Ten Thunders, who agreed to raid the prison where his son was held, so long as Sun Quiang agreed to serve them. They kept their word, and the Thunders whisked Sun Quiang to Malifaux, where he now plies his trade aiding their injured warriors and keeping their Rail Workers on the lines far longer than human stamina should allow.

Secretly, he curses his new masters, but Sun Quiang is a man of his word. He has resigned himself to his fate. The only line that he will not cross is to do harm. He has sworn himself to heal the sick and the dying, and he does so regardless of who they are. The Thunders allow this, so long as he remains useful.