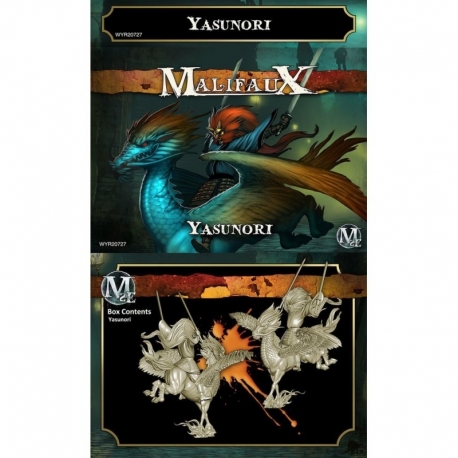 The oldest legends from the Three Kingdoms say that Yasunori was once a kabuki actor without peer. He could captivate his audiences with a voice that boomed louder than thunder or movements that whirled more gracefully than a swirling stream. His performance was so perfect that it was almost divine... inhuman, even.

One night after a particularly mesmerizing show, the audience begged him to take off his mask so they could see the true face of the man underneath. Yasunori complied, but the crowd could not accept the truth behind the demonic visage of the Oni staring back at them. They turned on the actor they had cheered but a moment earlier, chasing him into the forest with drawn weapons and powerful curses.

Memories of that painful night still haunt Yasunori, and his own shame burns inside him hotter than molten iron. Riding upon his fearsome longma, a winged steed he tricked into serving as his mount, the Oni now wreaks vengeance upon those whom he had once dedicated his whole life to pleasing.