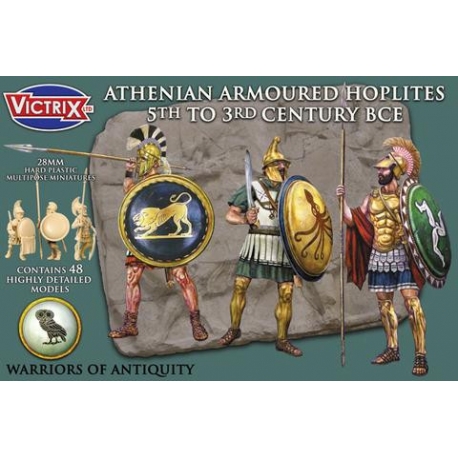 Victrix have created a fantastic set of miniatures which represents Greek Hoplites of Athens and other Greek states. With these model figures you can re-enact the Persian wars and the titanic struggle for Greek supremacy.

The box contains 48 finely detailed plastic miniatures which are some of the most versatile plastic sets on the market. You get 8 head variants with different crest options and other parts that add lots of variety to your models. With spears and swords that can be assembled in either thrusting or rest period, you can decide how you want your Athenian Armoured Hoplites lined up. A musician and other speciality positions for officers really finish of your force of Greeks.

This set can be mixed with all the parts from the other 3 Hoplite sets, Spartan, Theban and Mercenary which all have their own speciality heads and options to add yet more variety to your Greek armies.

Included in the box is a fantastic flyer produced by Great Escape Games giving you unit statistics for your Ancient Athenians to work with their Ancient Rules ‘Clash of Empires’, a superb set of rules that really capture the flavour of warfare in the ancient world. Or if you prefer, they can be used with other rule sets.