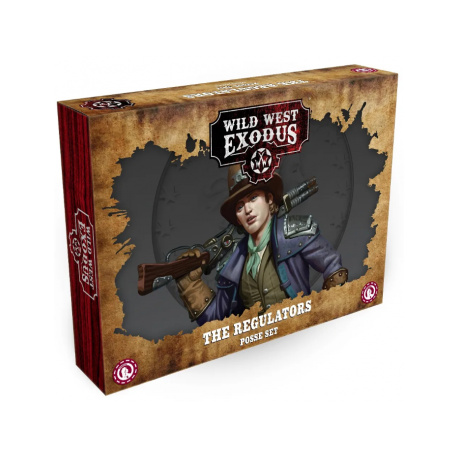 Legendary figures in the Wild West, like Jesse James, will naturally cast a long shadow in which other men will eternally skulk. William McCarty is one such man. Young, headstrong and impetuous, Billy McCarty rarely teams up with Jesse James. When he does, things quickly flare up and the two egos clash. McCarty perceives James as a broken relic who has had his day and who should make way for a faster, younger man such as Billy McCarty. In return, James sees McCarty not as a challenger to his outlaw crown but as little more than an upstart. It was James that first coined the sobriquet 'Kid', which McCarty so despises.

Billy The Kid champions the Enlightened's RJ-1027 technology in its many forms. He makes use of this 'juice' with an array of modern weaponry in his various criminal activities which include, but are in no way limited to, bank and stage robberies, street brawls and on occasion, simply 'settling an argument'.

Demonstrating no sense of guilt or remorse relating to the murders that he commits, Billy The Kid revels in the sheer, bloody joy it brings to his spirit. Billy The Kid is a man quick to anger, quick to revenge and quick to round up like-minded individuals who share his goals.

Billy The Kid is the leader of a like-minded gang known as the Regulators, who tread a curious line between notoriety and legitimacy. This is down to desperate Marshals who can turn to this gang of gunmen for their skill and experience in times of need. It is common to see the Regulators sporting the tin star, whether they are actually currently deputised or not. Regular members of this gang include The Apache Kid, trail finder, trapper and hotshot with his spirit bow. Jose Chavez y Chavez, notorious for his skill with both a machete and pistols in equal measure. Jake Williamson, a huge beast of a man known for butchering his foes with a meat cleaver. John Boxer" Middleton, the wielder of custom made shock gauntlets and expert pugilist. Laura Anderssen, deadly femme-fatale and deadlier shot with a pistol and finally Sasha Tanner, desperado extraordinaire who can fillet enemies with his bladed gauntlets.

Scenic base toppers are not included and are for display purposes only."