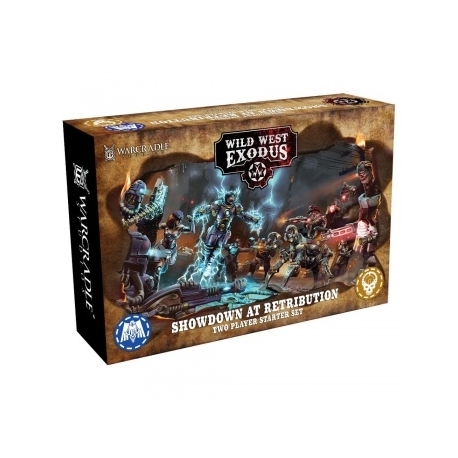 The frontier of the Union of Federated States is a wild and often lawless place. Ideal for outlaws, renegades and zealots to prey on the locals. Now a force led by the morally bankrupt Enlightened scientist Gustave Eiffel has arrived in the town of Retribution. The mayor sends out a call for aid and is overjoyed to find that the hero of the Union, Nikolai Tesla is in the area. But as the Union forces pull into Retribution it becomes clear that this is no coincidence and all has unfolded to Eiffel's plans for vengeance. The stage is set for an epic showdown in Retribution between these two rivals.

Get into the new edition of Wild West Exodus with Showdown at Retribution - a two-player starter set designed to give you a comprehensive introduction to the savage Wild West in the Dystopian Age. Containing dozens of fantastically detailed Warcradle miniatures, the full third edition rulebook, quick start guide to help you get going straight away and much more - this hefty boxed set is an easy way to explore the game and start your hobby adventure.