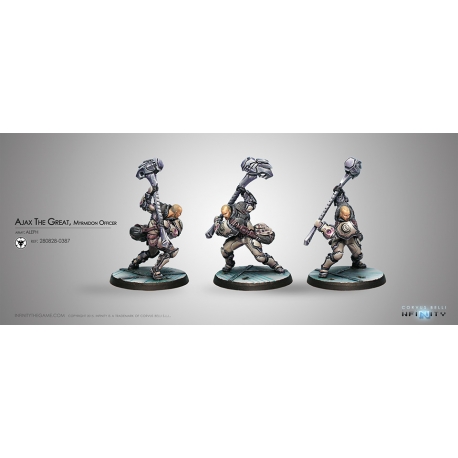 Áyax (in classic Greek: Αἴας), also known like Ajax the Great or Ájax Telamonio, was a legendary hero of the Greek mythology. King-warrior of Salamis and son of Telamon, he participated in the Trojan War and was described by Homer in the Iliad as the highest of the Achaean warriors, second only to strength and dexterity by his cousin Achilles.

Áyax (in classic Greek: Αἴας), also known like Ajax the Great or Ájax Telamonio, was a legendary hero of the Greek mythology. King-warrior of Salamis and son of Telamon, he participated in the Trojan War and was described by Homer in the Iliad as the highest of the Achaean warriors, second only to strength and dexterity by his cousin Achilles. Brave and stubborn, he would be one of the main Greek captains on the site of Troy, though not as skilled as Achilles or Odysseus. Ajax, pillar of the Achaean army, stands out as the only hero of the Iliad who received no help from any god.


Notes from Aedo Tamiris for the Information Service of the S.S.S .: "Áyax is the unbeatable wall of the Assault Sub-section. Surely it is not your brightest officer, but the toughest one. A mountain, a true colossus in battle. "

Contrary to what many believe, Ajax, one of the greatest heroes of the Myrmidons of the Assault Sub-section, is not an ALEPH Recreation. Born with the name of Gláboro DG-056, this Myrmidon of peculiar history would earn the nickname of Ajax the Great in combat, with sweat and, above all, blood.

Gláboro DG-056 was the first success of the Project: "Precursor", although only a partial success. "Precursor" was the name of the first phase of the Experimental Project: "Warrior" that would forge the prototype AR-1, the fabulous Lhost in which Achilles would be unloaded.

The road to AR-1 was long, very long, with dozens of experimental Lhosts developed in search of T.A.G. perfect humanoid The list of obstacles in the development stage was endless. The power of the micromotors integrated in the joints had to be balanced with the structural strength of the reinforced skeleton, and with the weight of the shield and all the extra systems. But the hardware does not stop being mechanical ... the subtlety, the art, is found in software, bioware and wetware. And here was where the failure occurred. The multiplicity of neural links needed to process the information provided by the advanced body of Gláboro DG-056 caused a sensory overload that broke the delicate balance of its wetware. The result was that Gláboro had a Lhost as superb as colossal, strong and resistant, but with a biosynthetic brain unable to reach its fullest potential. In this body, Gláboro DG-056 would be an exceptional warrior, but never the tactical genius that ALEPH needed. It was evident that the AI ​​would have to leave Gláboro aside and develop a very special Aspect to continue the Project: "Guerrero".

However, the investment in Gláboro DG-056 and his body could not be wasted. After all, good Gláboro was an absolute success on the physical plane. He was subjected to an intense battery of tests, and the knowledge gained would be the forge of the future Achilles.

After the testing phase, Gláboro DG-056 was quickly sent to the theater of operations of Paradiso, where he began to forge his legend. His imposing stature, his colossal strength and his courage and impetus before the enemy, turned him into a human battering ram to which all the Myrmidons continued without hesitation. In the midst of the heat of the battle is where Gláboro became a leader, and where the Myrmidons, steeped in Greek culture, gave him the name of Ajax the Great.

Since then, the name of Gláboro DG-056 was relegated to the official reports, and Ajax the name that the Mirmidones chanted when charging against the enemy. Ajax became a warrior as valuable as he was unexpected, so ALEPH saw to it that there was always a body from the "Precursor" series available to him. Not even the later arrival of Achilles, with his innate charisma and leadership, eclipsed Ajax, able to shine by itself in the chaos of combat. And every time the Assault Sub-Section dispenses tactical subtleties and requires violence and brutality applied in full front line, Ajax the Great is the beast chosen to command the steel tide of its Myrmidons.