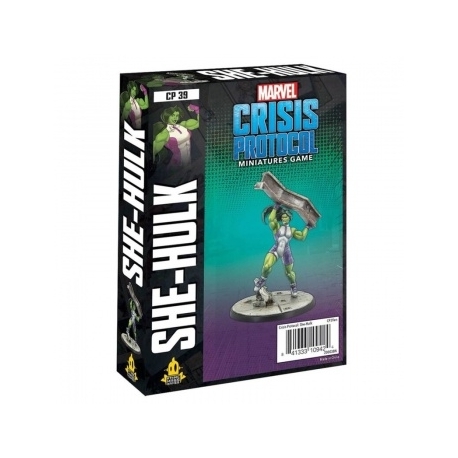 Marvel: Crisis Protocol is a tabletop hobby miniatures game set in the Marvel Universe. Players assemble, paint, and collect an ever expanding line of highly detailed plastic miniatures representing iconic Marvel characters. Players choose characters from their collections to form their own Marvel inspired dream team and then pit their chosen forces against each other on an interactive tabletop where the very terrain itself can be thrown, crashed into, and destroyed during the super powered showdown.

Jennifer Walters is the cousin of Bruce Banner, the Hulk. After an attempt on her life left her in critical condition, a blood transfusion from Banner infused her with gamma irradiation and transformed her into the savage and sensational She-Hulk.

While she gained much of the superhuman strength of the Hulk, Walters retains her sharp wit and honed sense of justice when she transforms, becoming a less inhibited version of herself. She rarely sees the need to return to her original self, preferring instead to fight crime with her immense strength and durability.