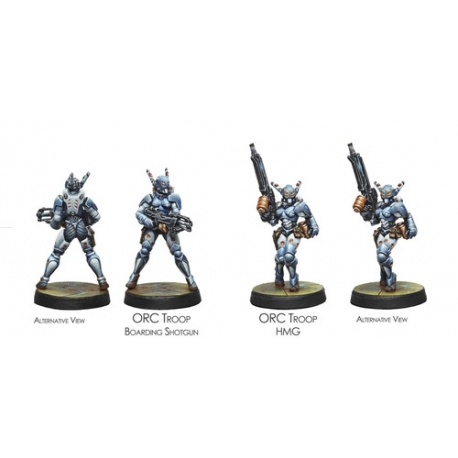 Only the very best soldiers can aspire to join one of the infantry units in the Heavy Tactical Group, unofficially but ubiquitously called Orc Troops. The “Orc” moniker comes from the logo of the manufacturer of their combat armors, the ORC Corporation, which stands for Omnia Research & Creation.

As a play on their equipment brand, some of the first troops deployed on the jungles of Paradiso started painting grotesque faces over the green camo patterns on their helmets, and the name stuck. Orc Troops have a reputation as seasoned veterans who volunteer for the most aggressive operations, and their fame is built upon the solid foundations of military success. As multipurpose heavy infantry, Orc Troops are often destined for the hottest battlefronts, to establish a tough line of defense or crack an enemy formation.
Manufacturer: CORVUS BELLI S.L.L.