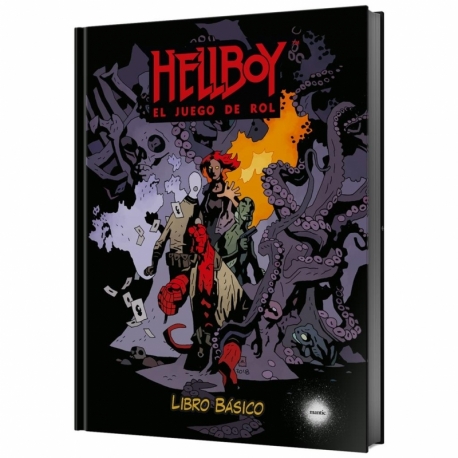 By buying this product you can collect up to 4 loyalty points. Your cart will total 4 points that can be converted into a voucher of 0,4 €.

Roleplay in the world of Hellboy! In 1944, the forces of the Ragna Rok Project unleashed the apocalypse embodied in a demonic child. After being rescued by the allies, this being, who would later be known as Hellboy, was a key player in thwarting all kinds of hidden threats on behalf of the Agency for Paranormal Investigation and Defense (AIDP). Whether it's goblins, demons, dragons or deities, these challenges are like any other day at work for Hellboy. But this is not his story, but yours. Hellboy: The Role Playing Game invites you to create unique agents with which to fight against the occult. You will be able to follow the style of the many and varied characters of the “Mignolaverso” or forge one of your own born from your delirious imagination. It's your chance to fight back! And we have also thought of you, the DJs. The hidden adversaries, artifacts, the careful descriptions of the classic Hellboy enemies will allow you to lead your players to explore a wide range of files; They will be Hellboy stories or modern reinterpretations of myths from around the world. Hellboy: The Roleplaying Game is based on the 5th edition rules and is a complete stand-alone game created to reflect the emotions of the Hellboy comics. This 248-page core rulebook offers options to: Join the AIDP in their never-ending war against the occult. Play as memorable Hellboy characters or create your own agents from various backgrounds and specialties. Participate in settings ranging from the 1890s to the classic Hellboy timeline. Take on Nazi occultists and smash their faces in!