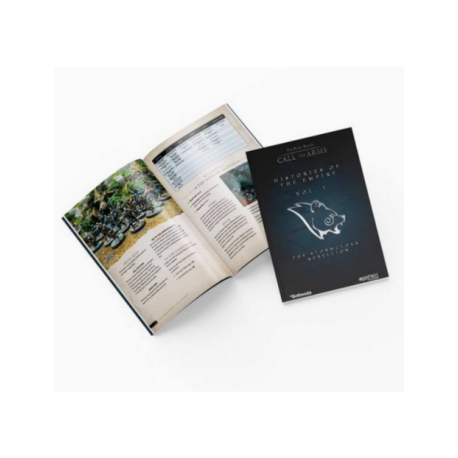 Histories of the Empire, Volume 1: The Stormcloak Rebellion is a narrative-driven expansion to The Elder Scroll: Call to Arms. Enabling its players to take part in pivotal events such as the search for the Jagged Crown and the Battle for Whiterun, culminating with the final push on the capitals of Solitude or Windhelm.

It includes a three-part campaign detailing the rise or fall of the Stormcloak Rebellion in their fight against the Imperial Legion. The first act details the skirmishes and rising tensions that lead to the Battle for Whiterun. The second places the player in command of their chosen faction, allowing them to tactically decide which holds to attack and gradually push their front lines toward the enemy's capital. The third and final act entirely focuses on the siege of a faction's capital, moving from the walls into the city itself and culminating in the hero's facing each other for a final confrontation that will decide the fate of Skyrim.

Included within this book are new rules for setting your battles within any of the nine Holds of Skyrim. From Haafingar with its soaring peaks to The Rift and its many beast nests. These new Hold rules allow players to further expand on the environment mechanics presented in the core rules and experience more thematic battlefields.

Building and expanding on the existing rules for Elder Scrolls: Call to Arms, this book offers new and exciting experiences for fighting in Tamriel. Adding extra effects to environments, altering what equipment each faction can take and offering thematic bonuses based on the holds the player controls, these expanded rules add a new depth to the game so the player can truly control how their faction handles the war.

Also included are rules for an entirely new faction - Hold Guards. Included are Heroes, Followers and Adversary cards that can be used as allies or enemies in your struggle for dominance.